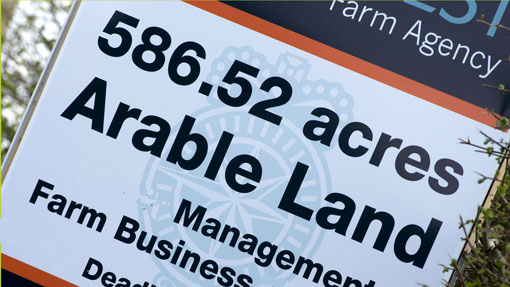 The number of large commercial farms coming to market remains low, but the total area offered by large farms has nearly doubled since 2012, according to research by Smiths Gore.

However, the total acreage offered by large farms nearly doubled, from 6,700 acres launched between January and May 2012 to 12,100 acres launched during the same period this year, following the land market picking up from its lull in 2012.

Buyers – both farmers and investors – were still looking for bare blocks of commercial arable land, said Giles Wordsworth, national head of farms and estates at Smiths Gore, and were reluctant to tie up capital in large houses.

“Last year there were a total of 35 farms larger than 500 acres marketed, the majority of these (71%) were properties with vacant possession which would appeal mainly to commercial farmers, 11% were let investment estates and 17% would appeal more to lifestyle buyers due to the value and quality of their principal dwelling. So far in 2014 the proportions have been similar,” said Mr Wordsworth.

The majority of farms for sale which were larger than 500 acres continued to be either arable or mixed farms, with six arable and five mixed hitting the market between January and May this year, compared to just one dairy and one livestock farm.

Smiths Gore’s reviewed all sales of publicly marketed farmland in England over 50 acres, where the residential value of the sale was less than 50% of the total.