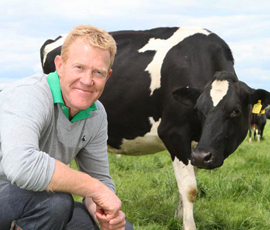 DairyCo is launching a new public-facing campaign backed by TV’s Adam Henson, it announced at the Livestock Event.

The campaign has been developed to run parallel with Red Tractor’s Trust the Tractor campaign and will be inviting consumers to “Discover Dairy”.

DairyCo’s consumer website thisisdairyfarming.com will be revamped and the levy body is beginning a PR campaign which will include social media to target consumer media.

The long-running Make Mine Milk campaign finishes this year, said DairyCo head of marketing communications Amanda Ball. This made DairyCo “stop and think about how we are going to move forward in promoting dairy.”

Livestock farmer and BBC Countryfile presenter Adam Henson is the face of the campaign. “I’m really pleased to be working with DairyCo on such an important campaign. People are rightly asking more questions about where their food comes from so it’s vital that dairy farmers get the word out that this is a modern dynamic industry producing great food to great standards.”

The campaign launches on 31 July.