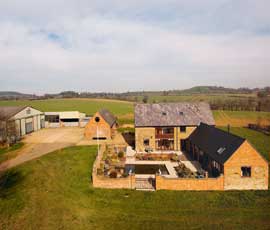 Next week will see the launch of four farms in Staffordshire, Northamptonshire and Buckinghamshire by one agent.

The total acreage of the four very different units is 900 acres. The largest of which, at 400, acres is made up of two neighbouring holdings. Ridgeway Farm and Stanley Fields Farm at Biddulph, Staffordshire, lie between Stoke-on-Trent and Congleton.

These neighbouring residential livestock units were previously let and will be auctioned in 14 lots on 11 May at Stoke City Football Stadium as part of an estate restructuring.

With Grade 3 and 4 land, the farms have very good views and lie within a ring-fence except for one 29-acre lot, says Fisher German partner Andrew Ranson. Ridgeway Farm has an attractive four-bedroom farmhouse needing renovation, a range of traditional brick farm buildings and undulating pasture land.

Stanley Fields Farm has similar land but includes modern as well as traditional farm buildings and a detached three-bedroom, 1960s-built bungalow with an agricultural occupancy condition.

Another residential farm, this time near Daventry, Northamptonshire, is described as being in a stunning situation. Meadows Farm, Badby, has an attractive five-bedroom farmhouse, comprehensive range of modern farm buildings, gently sloping Grade 3 arable land and a derelict barn.

The house and buildings are central to the ring-fenced land and there is some amenity woodland. The guide price for the 187-acre unit is £2m, equivalent to £10,695/acre and being sold by private treaty.

Although there is no house with the final block of land, which is 309 acres at Beachampton near Milton Keynes, Buckinghamshire, there was potential for planning permission for an agriculturally tied dwelling and range of livestock buildings, said Mr Ranson.

There are 285 acres of productive and generally level arable land in relatively large fields and just over 24 acres of woodland, tracks and other land, including a duck flighting pond.

This Grade 3 land is for sale as a whole or in two lots by private treaty with a guide price of £1.9m – about £6149/acre. The land has been well looked after on a contract farming agreement since the current owner moved to Devon, said Mr Ranson.

“In this severely under-supplied market, we are anticipating considerable interest in these quite different farms,” he said. “We have a very healthy number of potential purchasers registered with us, the majority of these buyers being expanding farmers or investors looking to benefit from of the tax advantages of farmland purchase or ownership.” (Fisher German 01295 226 288)