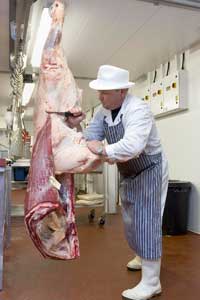 Livestock farmers could shoulder a bill of up to £32m under Food Standards Agency plans to increase meat inspection charges in slaughterhouses, the NFU has warned.

In response to an FSA consultation on whether money spent on the meat inspection service should be recouped from industry, the union warned the move could force many farmers out of business.

It said it was “completely opposed” to plans set out in the consultation, which closed on Monday (1 February) and instead called for a full review of the FSA’s delivery of meat inspections to find ways to cut costs.

Alistair Mackintosh, NFU livestock board chairman, said official meat controls were a legal requirement that provided a service to the public.

“It cannot simply be said that these controls are a business service for which the industry must foot the entire bill,” he said.

“Additional costs of £32m could potentially force many farmers, who are already struggling to turn a profit, out of business.”

Mr Mackintosh said the constulation came at a time when farmers, like other industries, faced huge increases in costs for feed, fuel and fertiliser, and that research had shown the majority of livestock farmers were operating at a loss.

“These proposals threaten the viability and sustainability of livestock production in the UK at a time when we are being asked by government to increase food production in this country,” he added. “This cannot be ignored.

“If the FSA isn’t willing to change its views, then the government must intervene.”