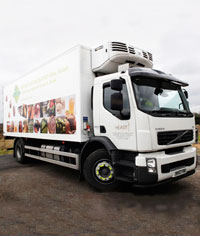 A regional food group representing producers in the West Midlands has won a prestigious award for cutting food miles.

Heart of England Fine Foods won the award for sustainable distribution at the recent IGD Food Industry Awards in London, after it showed its delivery service had reduced food miles by around 60,600 miles over a six month period.

The group beat off competition from Tesco, Boots, United Biscuits and Kimberly Clark.

Judges said HEFF had “removed lots of complexities from both ends of the supply chain, benefiting both the retail customer and suppliers alike, and providing a route to market for small and local producers”.

HEFF chief executive Karen Davies said the award was a great achievement for all involved and demonstrated what could be achieved through collaboration, regardless of the size of the business.

“It was such an honour to have been shortlisted but, as a smaller, regional business, to have come out on top against such strong competition is just incredible,” she said.

Some 97 producers and 300 customers use the HEFF delivery service, including Mid-Counties Cooperative, Morrisons, the National Trust and independent traders.