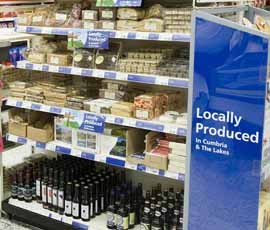 Almost a fifth of foods promoted as “local” in England and Wales are falsely labelled, a study has claimed.

Local government regulation inspectors found labels on 18% of products tested in 300 shops, restaurants, markets and factories made false claims about their provenance.

As well as “Welsh lamb” which came from New Zealand, the tests on 558 products revealed “Somerset butter” from Scotland and “Devon ham” from Denmark.

The LGR – which oversees council regulation – said the origin of a further 14% of products was unverifiable, so claims they were local were assumed to be false too.

The survey also found cases where ice cream marketed as local was a well-known brand, and “fresh local cream” which was actually a cream substitute with vegetable fat.

Restaurants had the highest incidence of false claims (19%), while manufacturers had the fewest (11%).

LGR chairman, Councillor Paul Bettison, said the results were “extremely worrying”. “Councils are working with businesses to make sure consumers have the information they need and that they are not being ripped off,” he said. “Many people want to support local businesses or choose food that has not travelled from the other side of the world, so it is vital that they have accurate information to help them make their choices.”