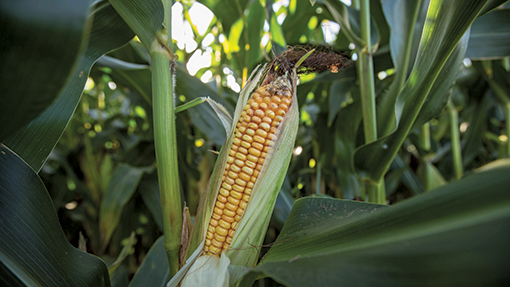 The growing global maize crop will increasingly dominate and set trends for all grain markets.

Speaking at the organisation’s annual grain market outlook conference, he said this was the second successive year when world grain production would outstrip demand.

“2014-15 is about stock rebuild and removing the spot market’s anxiety around supply. Expect to feel the increasing dominance of maize.”

The spot market was oversupplied with feed grains. “But we’re only ever one weather event from a draw-down on those stocks.” Lower production in near east Asia and in north Africa would provide some export opportunities, he said.

While production will exceed demand this season, end-of-year maize stocks at 190m tonnes will represent less than 10 weeks’ supply.

Maize for ethanol should be considered a mature market, so exports would have to absorb the extra production, said Mr Watts. The four major maize exporters – the USA, Brazil, Argentina and Ukraine – accounted for 80% of world trade.

The UK wheat crop rose by almost 40% to 16.6m tonnes this year, the largest year-on-year increase since records began in 1893.

Wheat was a more complex market this season, with broad quality and price spectrums in both the feed base and milling premiums, said Mr Watts. The breadmaking wheat premium now made up 30% of the total price compared with the more usual 10-20%.

Within the milling sector, the wide price range of grain for export reflected the protein gap. Canadian red spring wheat is at about £175/t, US Dark Northern spring wheat at £169/t and French grade 1 wheat (220 Hagberg) at £132/t.

Export business was critical to EU and UK trade. Mr Watts described US wheat stocks as the “comfort blanket of the world”, offering consistent quality and possibly a rise in end-of-season stocks. However, a key challenge for global wheat trade included the level of investment needed in logistics.

Despite the UK producing a 7m tonne crop for the second year running, barley was bucking the trend, with a lower stocks-to-use ratio (17% by September 2015) than for other grains. Nevertheless, barley was a price follower, said Mr Watts.

The EU was the powerhouse of production, with Canada’s acreage at a new low, Argentina retreating and Australia a competitive exporter. Close to much of the world’s demand for barley, Russia and Ukraine were established exporters while Saudi Arabia was the dominant importer, followed by China, where growth prospects were uncertain.

“Global barley supply and demand looks to remain tight, but has to follow the dynamics of the broader grain market to avoid being priced out,” said Mr Watts.

More than 15% of the world’s oilseed crops are now used as biofuels, the conference heard.

The need for oils had grown faster than the need for the meal co-products, said Dr Julian McGill, senior economist at agribusiness consultant LMC International.

Despite lower support for biofuels in the USA and the EU, the relationship between crude oil prices and vegetable oil markets was stronger than ever, said Dr McGill.

Crude palm oil prices in south-east Asia had recently dipped below that of crude oil, and in Indonesia, crude palm oil was seen as a cheap fuel.However, for the past year, lower prices had slashed margins at the frontier of crop production, for example in Brazil, where cutbacks in plantings were expected because of low prices.