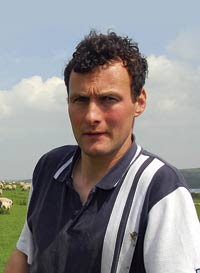 With the first 2009-born lambs due to be finished later this month, Aled Jones is concerned about the size of this year’s crop. “The flock did not scan well and we knew there was no chance of achieving our target 150% lambing,” he says.

Some yearling Beulah ewes produced a lambing percentage of 122%, while one group of mature crossbred ewes achieved 190%. “We have to find out why the conception rate of different batches was so variable again.”

Blood tests failed to pinpoint a mineral deficiency and Mr Jones is looking at the possible impact of herbage quality, especially at tupping time. Local contractor Eifion Morris and his son Elwyn were employed to plough and re-seed eight acres with a mixture of intermediate and late-flowering diploid perennial ryegrass, a late-flowering tetraploid perennial, timothy, two varieties of white clover and mineral-rich perennial chicory.

“We were going to grow a crop of swedes before re-seeding, but felt we could not justify paying to plough the area twice. Ploughing, seedbed preparation, lime, fertiliser and seed cost about £200/acre,” Mr Jones says. “Cultivations went well and we were pleased that somebody had stone-picked the area in the past, but we were worried that the dry spell would affect germination. Fortunately, the rain came in time and there seems to be a good take.” The new ley will probably be lightly grazed by finishing lambs before being shut off to flush ewes.

It cost approximately £7500 to spread 400t of non-magnesium lime across 200 acres where soil tests indicated pH levels had fallen as low as 5.2. “There are times when sheep on some areas do not do as well as they should, possibly because the grass is not sweet enough. We hope liming will correct this and improve performance.”

In addition, some fields have been sub-divided to create four paddocks of between 20 acres and 30 acres, on which it will be easier to manage grazing to provide grass for lamb finishing and ewe flushing.

Following a shortage of early-spring grass, and agri-environment scheme restrictions on grazing areas where there are ground nesting birds such as lapwings and curlews, the farm has more grass than the ewes and lambs can use efficiently.

“We are living with the usual mixture of famine and feast,” Mr Jones says. “Ideally, we would like to take in some cattle, but less people seem to be looking for extra grazing this year.

“Bovine TB has had an impact and good prices have persuaded local farmers to sell stores earlier than usual. It seems we have no choice but to use a topper to manage some areas.”

No decision has been taken about where prime lambs will be sold, although Mr Jones is likely to use both live and deadweight marketing. “It will be a case of watching prices and trying to negotiate the best possible deal. Unfortunately, like other hill farms, we have to sell when the market is usually flush with lambs.” Monitoring prices and grass availability will also dictate whether it would be better to sell some lambs as stores.

The 400 ewes put to leased Texel rams carrying the Inverdale gene produced 270 ewe lambs for breeding. Breeding company Innovis says, that from this season, the females will be marketed as Aberdale ewe lambs.

The contract says that from birth these belong to the company and the farm is guaranteed a return of at least £1.20/kg on female lambs that weigh more than 40kg in late summer.

Mr Jones hopes the Anglesey breeder who took some of last year’s crop was pleased with their performance and will be back for more. Male lambs are not covered by the contract and will be finished and sold with others produced by the rest of the flock. “All of the lambs born on the farm this year are growing well, but despite taking precautions we lost 30 to dysentery. Our vet and the pharmaceutical company involved are investigating the deaths to assess whether a new strain of bug was involved.”

Mr Jones remains worried about bluetongue. Unlike many Welsh upland farmers, he believes the disease could be carried high into the hills. “This year we have seen swarms of Painted Lady butterflies from north Africa, and if they can reach us, so can midges from France.”

There is no question about vaccination, although he is debating when to do it. In theory, the sheep are protected until September and he is reluctant to inject sheep that may be sold before then. However, it cost £770 to vaccinate last autumn and the possibility of using the half-priced vaccine available is tempting.

He will not repeat last year’s decision to give bluetongue and foot rot jabs close together near tupping time – something he feels could have contributed to the disappointing lambing performance.

After three years, Tregeiriog Farm has hosted its final open day as a Farming Connect/ Hybu Cig Cymru demonstration farm. Mr Jones believes he has benefitted from the three-year contract, not least from involvement with the linked local discussion group. He has also learnt a lot from contact with independent grassland, nutrition and veterinary consultants.

“I have had access to faecal egg counting equipment to be able to time worming better, which is estimated to have saved us £400/year. I have also been given advice on coping with white drench resistance.”

But it won’t be the end of open days at Tregeiriog. On 2 July, the farm will host a FWAG-organised event focussing on a range of environmentally-friendly bracken control techniques.