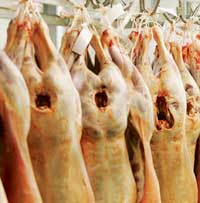 Tighter supplies of UK lamb have led to a growth in lamb imports, particularly from New Zealand, according to the Agriculture and Horticulture Development Board‘s latest UK Market Survey.

It shows UK slaughterings were down 18% in the first quarter of 2010, but exports of sheep meat from New Zealand increased by 4% in Q1, with sales to the UK rising by 23%, year-on-year. NZ chilled meat exports accounted for the growth, with chilled and frozen sales totalling 128,000t.

“Slaughterings at New Zealand’s export abattoirs during January to March 2010 increased by 3% compared with the same period in 2009. Chilled meat exports were up 18% year-on-year; the majority of this growth was in exports to the EU, which increased by 3600t.”

The price for chilled meat from New Zealand rose by 5% in sterling equivalent in the first three months of 2010.

Exports to France increased by 7% over the same period, while sales to non-EU markets grew by 23%, albeit to a small proportion of export trade.