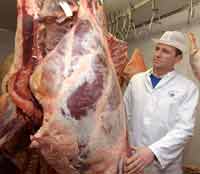 Scottish meat processors are facing serious challenges, with soaring costs and pressured margins, according to Alan Craig, president of the Scottish Association of Meat Wholesalers.

“Cattle prices went from 215p/kg to 300p/kg in the half-year to June 2008, an inflationary increase which would normally have been spread over 15, maybe even 20 years,” he said. “With consumers paying only a small part of this increased price at the retail level, processor margins have remained extremely tight throughout the past year.”

With little scope to improve operating efficiencies, processors needed retail prices to rise. “Being realistic, however, the current economy is unlikely to allow major retail price growth in the short term, no matter how justified it may be.”

An urgent reduction in the regulatory burden was therefore critical, said Mr Craig. “Our industry is stuck in a high-cost regulatory time warp. This is damaging to businesses and a threat to the future viability of many rural communities.”