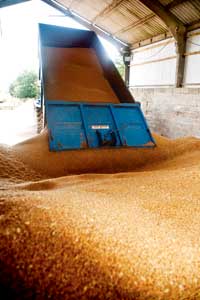 Wheat prices have mounted a slow recovery this week, presenting farmers with a “sell opportunity” following a prolonged period of market weakness.

As Farmers Weekly went to press on Wednesday (3 March), ex-farm wheat was trading at £90-92/t – up about £3 on the week – with traders citing the weakness of sterling as the main driving factor.

Two weeks ago the pound was worth €1.15, but this week it slumped to €1.10 as currency speculators acted on rumours of a hung parliament in the UK this summer.

“The pound has taken a proper pasting – and this has leant support to the market,” said Jonathan Lane of merchants Gleadell. “This has tempted farmers to sell. Were it not for currency, we would be seeing wheat down around the £85/t mark.”

But there are still factors conspiring to keep a lid on prices. Mark Smith of Saxon Agriculture said the biggest problem was a lack of buyers. “UK wheat is at a discount to French for old and new crop, but that does not help if no-one wants it.”

The weakness of sterling has, however, given a boost to intervention barley, with successful samples now getting about £85/t ex-farm compared with £75/t in the free market.