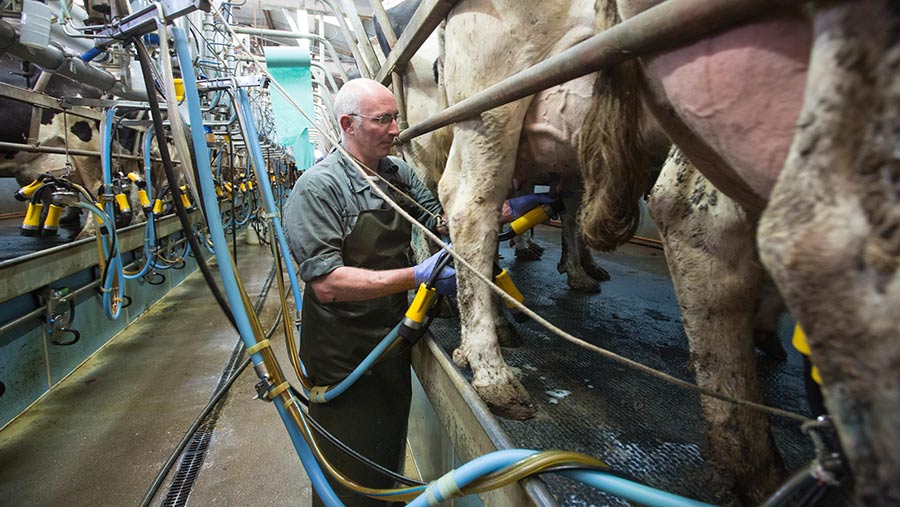 The package could take the form of a hardship payment, the NFU president told journalists during an online media briefing on Monday 27 April.

Some 1,800 dairy farmers are said to have emailed their MPs after turmoil in the supply chain due to coronavirus saw processors reduce prices for some contracts.

One in three dairy farmers had been “severely impacted” by the crisis, said Mrs Batters, with some producers forced to pour milk down the drain.

Processor Freshways – which supplies coffee shop chains and other foodservice outlets – was first to cut the milk price with a 2p/litre reduction in March.

The dairy processor has since said it would pay farmers at the end of April for half the milk produced in late February/March, with the balance paid in mid-May.

Meanwhile, Muller has withdrawn a planned 1p/litre price rise for May.

The NFU and dairy processors held a conference call with Defra earlier this month as they pressed the case for additional financial support for the sector.

The government said it would temporarily relax elements of UK competition law to support the dairy industry – but farm leaders said this was not enough.

Defra said relaxing competition law would allow the industry to adapt to decreased demand from the hospitality sector and reduced collection by retailers which have had to close.

It said the announcement would enable further collaboration between dairy farmers and producers so they could avoid their surplus milk going to waste.

This could include sharing labour and facilities, co-operating to temporarily reduce production, or sending milk to be processed into products such as cheese and butter.

Defra secretary George Eustice said: “Our dairy industry plays a crucial role in feeding the nation and it is essential that they are able to work together at this time.”

He added: “We’ve heard loud and clear our dairy farmers’ concerns which is why we are further suspending competition rules law to allow dairy farmers to work together.”

Mr Eustice also urged farm businesses to access government-backed loans that were available from their bank to support them during the coronavirus lockdown.

The dairy sector is the UK’s largest farming sector, with milk accounting for 16.85% of total agricultural output in the UK in 2018.

Of this, approximately 50% of UK dairy sector output is fresh milk and, as such, accounts for a significant amount of UK processing capacity.