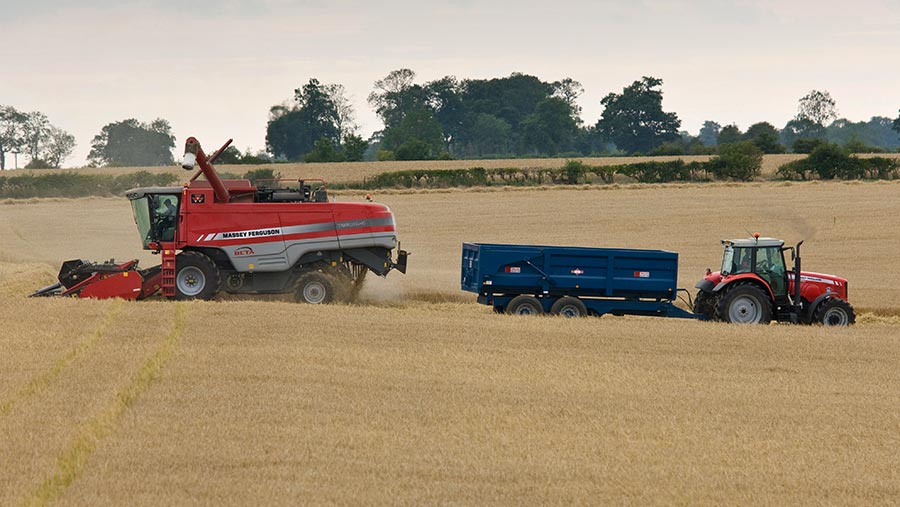 Wheat prices came under pressure again this week, with both buyers and sellers holding off in an uncertain market.

While prices are in a wide regional range, the midweek August feed wheat average collected from merchants by Farmers Weekly was £156/t ex farm, about £1.50/t down on a week earlier.

The range of £150-£162/t for August movement generally reflects higher prices in the north and north west where acreages were down the most.

Bushel weights are generally good, but yields and protein are very variable, say merchants, although many in the north have seen relatively few samples so far.

See also: Biodiversity net gain: what is it, how will it work?

With the UK expecting a much reduced wheat crop, as in many other European countries, growers have held back from selling and continue to do so. However, consumers of grain are largely doing the same, said Saxon Agriculture grain director Mark Smith.

“There’s a high level of farmer retention and buyers have got a fair bit to buy, but are put off by the coronavirus uncertainty over what their customers in turn will need,” he said. “There’s huge uncertainty in the market.”

Further north, GrainCo managing director Gary Bright usually relies on a good level of exports and ethanol plant demand for wheat, but neither is happening this season.

A slightly stronger pound this week put pressure on milling wheat premiums, bringing the average full-spec breadmaking premium down to an average of £20/t-£21/t midweek, compared with almost £24/t a week earlier.

German wheat quality is reportedly good and will provide a cap to the milling premium, say traders.

Back in the feed wheat market, Russian wheat prices continue to put pressure on grain prices elsewhere, with harvest forecast rising almost weekly and a fast pace to exports.

London feed wheat futures values remain at a premium to the French market, with the latter having lost far more ground in the past couple of months than London.

Feed barley is still at a big discount to feed wheat, averaging £26/t less than wheat. However, barley held its ground this week, helped by a decent pace of exports leaving the UK, mainly for EU destinations.

Competing with UK feed grains is a huge weight of cheap maize. The AHDB forecasts UK maize imports at more than 3m tonnes in the current crop year, compared with 2.2m in 2019-20.

The US Department of Agriculture was due to release its first forecast of the 2020 US maize yield based on crop conditions shortly after Farmers Weekly went to press on Wednesday (12 August). This was likely to move markets.

Oilseed rape also lost ground this week, pressured by a stronger pound to average £321.7/t ex-farm for August, which was down about £5/t on the week.

United Oilseeds said farmer selling had slowed as growers concentrate on drilling and other crop harvests. With an expected crop of about 1m tonnes in the UK and little being offered by growers, rapeseed is already being imported to help meet the national demand for about 2m tonnes of rapeseed a year.

Coronavirus demand uncertainty is also affecting this market as more travel and other restrictions are threatened.