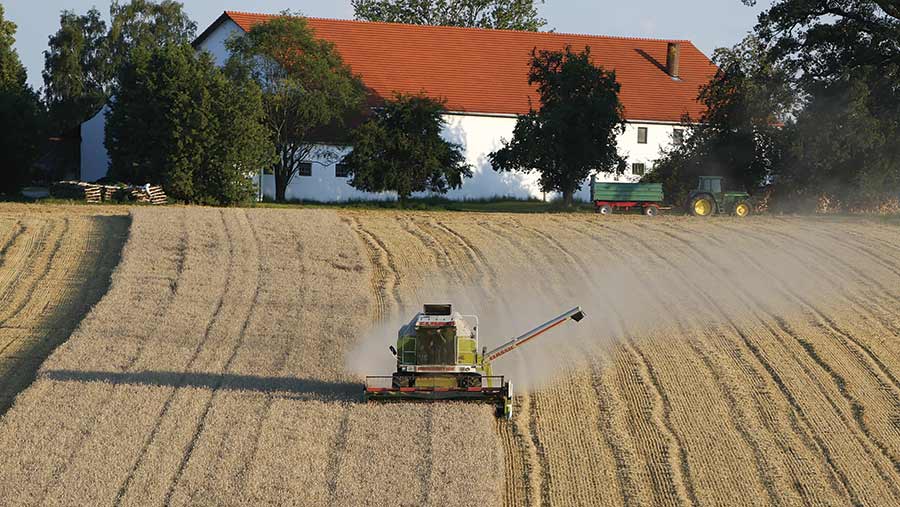 The closing words of the last Global Grain Insight (Farmers Weekly, 18 May) were that it would take something “new and significant like a major weather event in the Black Sea region to really drive the market further”.

And that is precisely what we have seen ever since – an extraordinarily prolonged period of warm and dry weather centred principally on the key grain producing regions of north-west Europe and southern Russia.

Many areas of the UK have received no measurable rainfall for the best part of two months.

See also: Farm vehicle use – are you insured?

The impact on grain prices has been dramatic as Russia and the EU have made substantial downward revisions to their crop production forecasts.

Some in the industry are talking of a UK wheat crop of only 13m tonnes which would represent a drop of more than 10% on last year.

If true, the UK will have fared relatively well in comparison with some of its European neighbours; the German farmer’s association DBV estimates the country’s wheat crop at only 18m tonnes – a 25% reduction year-on-year.

So in the space of only a few months, the world has transitioned from a situation of relatively plentiful wheat supplies to one where the stocks-to-use ratios of the major exporters are again approaching all-time lows.

As we saw in 2008 – the last time the world was in a similar situation – lower stocks-to-use inevitably lead to higher prices. The question on everyone’s lips, predictably, is “how long will it last?”

Certainly new crop markets will have to maintain significant “risk premium”, as there is, of course, no guarantee that the next northern hemisphere harvest will help to rebuild stocks.

Nor does it seem that the southern hemisphere harvest will help much either, as illustrated by current forecasts that the Australian wheat crop will see significant declines over last year.

With the UK wheat crop potentially 10% down on last year this could leave a 2.5m-tonne shortfall to be filled by imports

This, however, is based on both of the Northern biofuel plants operating at the same rate as last season. Lower use by them would make a big difference to supply and demand and could drastically reduce imports.

With wheat for next harvest trading at a £25/t discount to old crop July, our domestic consumers are starting to view 2019 crop prices as relatively good value, indicating that further price rises are possible.

In the end, the function of higher prices is to encourage producers to maximise their output, and this is the key signal that farmers should be receiving from the market.

In recent years, many farmers have been encouraged to turn away from the mainstream crops and consider “niche” markets.

These opportunities can provide benefits including higher returns, optimising workload and other agronomic benefits. There can, however, be risks such as lower yields, lower consistency and commitment to a single buyer.

However, things change very quickly and with the UK now a significant importer of wheat, farmers should be encouraged that there will be no shortage of domestic demand for the traditional, mainstream crops from harvest 2019.

With feed wheat at £160-170/t ex-farm for next harvest, the message from the markets is clear – UK producers should focus on increasing output to take advantage of higher prices.

At the same time as the worldwide weather has changed the supply and demand balance, other factors have been at work too. Global politics, the implications of trade sanctions and population growth have added new dynamics to the markets.

US markets, weighed down by fears of the long-term effects of President Donald Trump’s protectionist trade policies, have been relatively subdued in recent months.

Closer to home, leading industry figures have predicted that a no-deal Brexit will lead to food – of which the UK is a significant net importer – becoming more expensive.

If this scenario plays out, by the same logic, domestic grain prices will need to rise as well. Furthermore, the negative impact on sterling caused by a hard Brexit would strengthen domestic grain markets.

Of course, the current supply situation is not just due to a dip in production. In the decade since 2008, we have seen increasing demand, led by continued population growth and the trend towards diets increasingly reliant on grain.

A world population heading towards 9bn people by 2050 not only puts demands on growers to produce more, it adds complexity to trade flows at both a global and domestic level.

The UK is a good case in point, with the backdrop of our national supply and trading industry undergoing significant consolidation in recent years, including several high-profile failures. Businesses need to be financially sound to survive.

However you look at it, a strategy of producing more grain and having access to markets that will pay the most for it will drive UK grain production in future, not short-term political hurdles or the odd low production year like 2018.

The only thing likely to pull prices down is profit-taking by speculators or heavy farm selling and the continuing trade war fears resulting from President Trump’s recent actions.

Canada, Australia and India all need watching because of ongoing weather concerns.