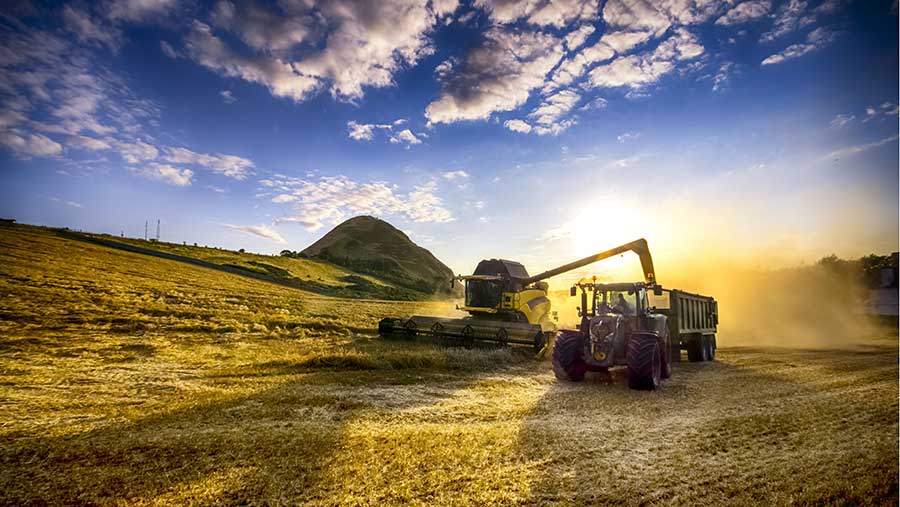 Production estimates released this morning (4 October) by the Scottish Government put the average Scottish wheat yield at 8.1t/ha, above the 7.7t/ha NFU harvest survey for England and Wales.

The spring barley yield is projected to be 5.3t/ha, just 0.1t/ha ahead of the NFU estimates.

Wheat makes up about a fifth of the total Scottish cropping area, with most of the crop used for the production of alcohol.

Perth-based Strutt and Parker director Mary Munro said that wheat yields have been “all over the place”, with first wheats performing significantly better than second wheats.

“The less intense heat and a very wet winter carried crops through the beginning of the dry spell,” she said, while some rain at the beginning of harvest also prevented plants from dying back as rapidly as in fields further south.

Mixed farmers who were able to regularly spread manure on their arable land had also seen better results than pure arable farmers, she said.

Scotland’s most important crop, spring barley, has had a more difficult year, with average yields forecast to fall back to 5.3t/ha – 10% down on the previous season.

Ms Munro said that establishment was difficult for many growers as crops went into very dry seed-beds and then took up nitrogen very slowly, which severely decreased the number of tillers.

However, there has been some good news since harvest despite the low yields as prices have risen and maltsters have relaxed the nitrogen specifications, meaning more crops qualify for the premium.

Total spring barley production is forecast to be about 1.33m tonnes – about 7% lower than last year.

It has been a difficult season for winter barley after delayed harvesting of crops in 2017 pushed back drilling dates and reduced the total cropping area by 21%.

However, yield is projected to be 7.6t/ha, up on the year, with quality also said to be good.

Ms Munro said that the earlier harvest this season means it is highly likely that the winter barley area will increase this season back to more normal levels.