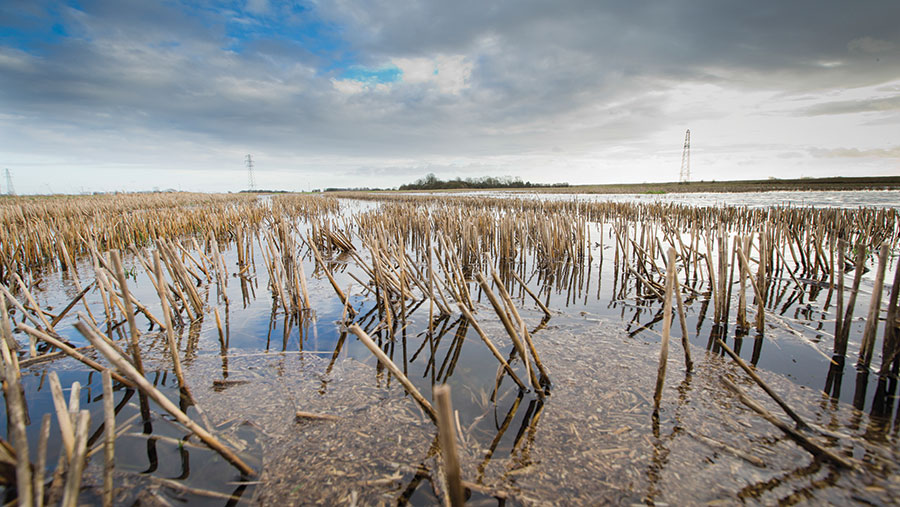 Arable farmers have planted the smallest winter cropping area in decades after relentless rain kept wheels from turning across many parts of the UK.

Just 1.5m ha of winter wheat is projected to be harvested this season, down more than 300,000ha or 17% compared with what was harvested in 2019, according to a recent AHDB planting survey.

This figure includes 287,000ha of winter and spring wheat that growers still intended to plan as of 14 February.

See also: Advice to get thin, struggling wheat going after a wet winter

With the ground saturated after Storms Ciara and Dennis and the winter cropping window nearly shut, this will be challenging, and the AHDB says these intentions are still highly flexible and dependent on soil conditions over the coming weeks.

Farms across a swathe of heavy land in the midlands appear to be the worst affected, with spring and winter wheat planting in the East Midlands at just 62% of what growers plan to establish, while both the North-West and Scotland have more than 95% planted.

There have also been dramatic declines in the projected winter oilseed rape and winter barley area.

With winter losses accounted for, the oilseed rape area is forecast at 361,000ha – down 38,000ha compared with the AHDB’s November survey.

Met Office figures show that 423.9mm of rain has fallen between the beginning of December and 17 February, currently making it the wettest winter (rainfall in December, January and February) since 2016.

With winter crops ruled out, affected farmers have had to make difficult decisions about whether to fallow land or increase spring cropping area.

The area of spring barley is set to be 1.04m ha, the first time it has exceeded one million hectares for decades.

This is a 47% increase on the 2019 planted area and 10% more than growers intended in November.

He said prices would not necessarily fall further, as the UK is already export competitive, but barley’s discount to wheat may widen beyond its current level of about £20/t.

Growers are also compensating by planting more oats, with the AHDB projecting the area will increase from 182,000ha grown in 2019 to 229,000ha this season.

A separate planting survey conducted by Savills revealed 41% of farmers are planning to make changes to their cropping, rotation or machinery to improve the resilience of their farm business to the effects of wet weather.

Where change is planned, 67% intend to change their machinery, 62% plan to change the crops they grow and 48% plan to revise their usual crop rotation.

Andrew Wraith, Savills head of food and farming, said: “The past six months highlight the incompatibility between the delayed drilling blackgrass control strategy many farmers have been forced to adopt and climate change predictions that the UK will have wetter winters and experience more extreme conditions.”