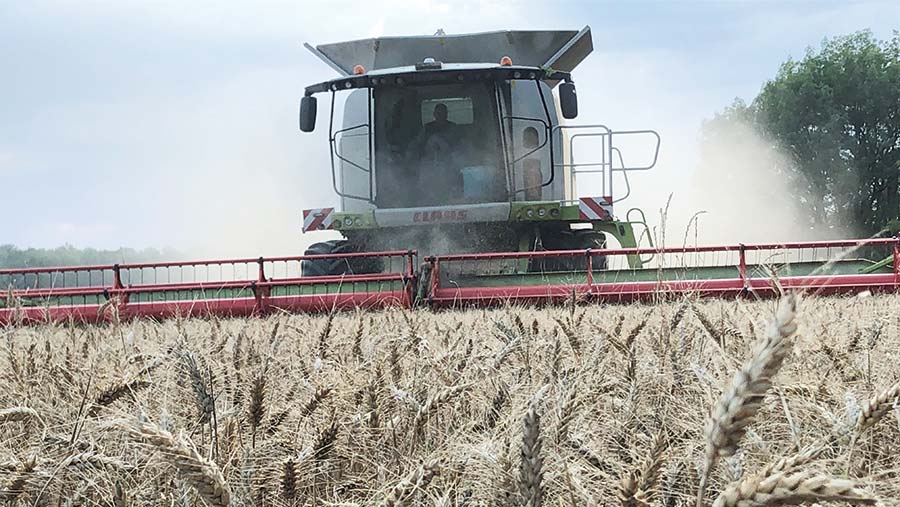 First wheat to be cut on 7 July at La Tournaciere in central France. Drought has taken its toll on this very sandy land, which is yielding 7t/ha © Nigel Wellings/Acres Insurance

Wheat prices have fallen by about £5/t in the past week, as harvest makes better progress than expected in other European countries.

Better weather in the US has raised hopes for crops there and added to the downwards pressure, with US futures losing US$10/t (£8/t) last week.

Sterling has fallen to a six-month low against the euro, which should support UK grain prices, but has failed to do so.

Analyst CRM sees a 15m tonne-plus crop as likely for the UK, which will mean we will have an exportable surplus. The market agrees, with the drop in futures reflecting that sentiment.

European futures also fell to almost a two-month low earlier in the week.

France’s Ministry of Agriculture puts the country’s 2019 wheat crop at 37m tonnes, an 8.5% increase on last year’s crop and about 4% above the five-year average.

About 75% of French crops are rated good or very good and the country was not drastically affected by the recent heatwave, said the AHDB.

US maize prices have been under pressure as conditions for the crop improve, although plantings are 9% down on the previous year because of very heavy rains.

However, with the Chinese African swine fever pig slaughter continuing, there are market worries over demand for both corn and soya beans.

AHDB analysts put the wheat outlook as neutral to bearish. “Large global supplies and forecasts of good harvests are driving a marginally bearish feeling to the market at the moment. However, volatility from the maize market will drive daily movements,” it said.

The maize outlook was similar, although with more uncertainty and volatility.

Any UK wheat exports are likely to be centred on southern Europe, with Spanish production feeling the pressure from the European heatwave, said the AHDB.

The hottest competition comes from Ukraine, which is offering export wheat at £14/t cheaper than UK supplies.

The Paris oilseed rape futures market rose on Tuesday (9 July), adding £5/t to UK prices, as fears grew that crop yield will turn out even lower than expected.

The French crop is down 27% year on year to 3.64m tonnes – the smallest crop since 2003 – and early oil analysis is low, according to farmer co-op United Oilseeds.

This will raise demand, although global oilseed production will rise.