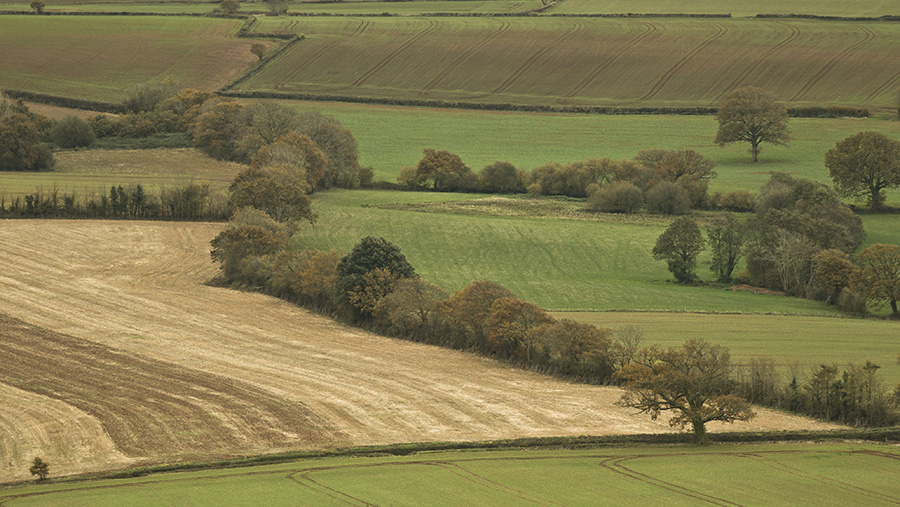 Farmland values fell in the first quarter of 2016 as weak agricultural commodity markets and EU uncertainty made buyers more picky.

English values of bare arable and pasture land fell 3% in quarter one of this year compared to the last quarter of 2015, to average £8,000, according to data from Knight Frank.

The agent said it was the largest quarterly fall on its farmland index since 2008 when values fell 5% following the collapse of Lehman Brothers bank.

“Given the significant issues weighing on the market at the moment, a period of readjustment is perhaps unsurprising,” said Andrew Shirley, head of rural research at Knight Frank.

Agricultural commodity prices remain low with little prospect for a strong rebound in the short term, while the potential implications of a UK exit from the EU are adding further uncertainty Andrew Shirley, Knight Frank

“Agricultural commodity prices remain low with little prospect for a strong rebound in the short term, while the potential implications of a UK exit from the EU are adding further uncertainty.”

But whatever the outcome in June, the company was still seeing strong demand from farmers who were either not reliant on EU subsidy payments or had taken the long-term view that expansion was necessary, said Mr Shirley.

However, Mark McAndrew, head of national farm sales at Strutt & Parker, said that while the upcoming EU referendum had caused uncertainty, with less land coming to the market in recent months, average prices had remained relatively stable.

“Many of these sales were agreed before the date of the referendum was announced, however, it does feel like the threat of Brexit is having less of an impact on land values than some commentators had predicted,” he said.

He said location was becoming increasingly important in the market where lifestyle buyers and farmers with rollover funds from development land were influential, and that farmers were given closer consideration to whether they should invest in land or not.

There is a limited number of buyers for smaller, livestock units, but demand is there for extensive, well-balanced stock farms James Butler, Strutt & Parker

“Buyers are being more price sensitive in Scotland due to the delay in their basic payments and poorer commodity prices.

“However, prime arable farms remain in short supply and buyers are prepared to pay a premium for quality offerings.

“There is a limited number of buyers for smaller, livestock units, but demand is there for extensive, well-balanced stock farms.”

Strutt & Parker also released its farmland figures this week, showing a quarterly fall of 3% on the value of English arable land in the first three months of this year.

The average price of arable land in England dipped down to £9,668/acre in quarter one of 2016, said the agent.