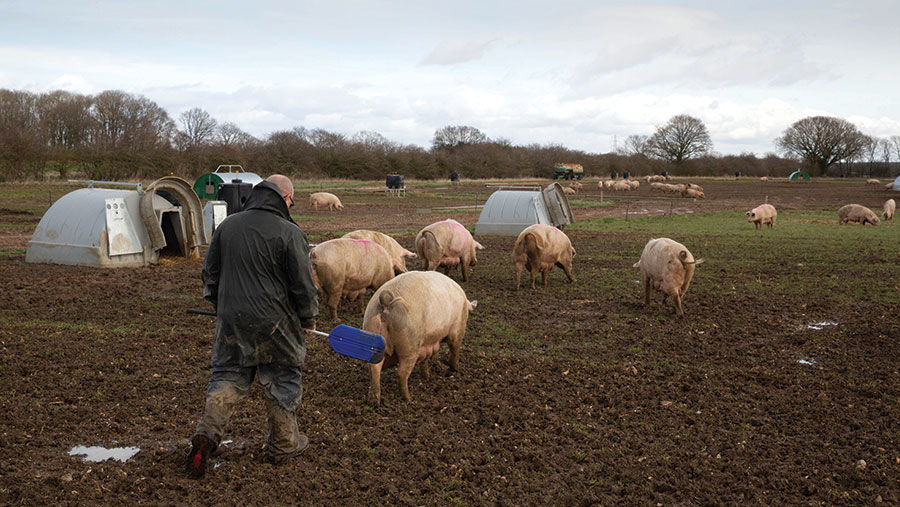 Tight supplies and strong demand for British pork will create a buoyant market over the next six months, forecasts the AHDB.

In its latest Pork Outlook report, the sector body suggested demand, both domestic and export, would bolster prices for the remainder of the year.

However, it warned that Brexit and any restrictions on exports due to Covid-19 could undermine that positive prediction.

Without those potentially negative influences, the outlook expects exports to absorb extra domestic supplies and for already firm prices to improve as 2020 progresses.

Prices have shown little movement this year, remaining at a generally elevated level, said the report.

The steady rises through 2020 had been achieved despite global market turmoil this year, with prices up from around 162p/kg at the start of the year.

“Based on a continuing, fundamental, global pork shortage, it seems feasible that the situation will remain similar for the rest of 2020,” the report said.

Improvements on the Chinese market would help support the EU market, limiting the risks of competition from lower-priced EU pork, said the report.

The AHDB stressed that its forecast assumed an optimistic demand scenario post-Covid-19 and continued free access to the EU market after 31 December when the UK leaves the customs union.

The premise for this was a 7% increase in UK exports of fresh/frozen pork from  January to April, totalling 81,000t. This growth continues to be driven by Chinese demand, with UK shipments 75% up on the year during the period.

The breeding herd grew by about 3% in 2019 and further modest growth is expected this year, the AHDB reckoned.

Overall the AHDB production forecast was for an increase of 4% in 2020, reaching 989,100t, due to a combination higher slaughter levels and rising carcass weights.

However, in the short term slaughter is likely to be close to year-earlier levels due to performance issues on farm last year, which are feeding through to numbers forward.

With the difficulties eased, it is expected productivity will improve. This, combined with the breeding herd expansion and heavier carcass weights, will increase production.

AHDB senior analyst Duncan Wyatt said the world pork market would come back towards balance in the next two to four years.

The Chinese market, which had been good for UK production, would continue to be important but perhaps less reliable, Mr Wyatt said.

“When Chinese pork production recovers from African swine fever, the global animal protein shortage will likely be filled, and the Chinese domestic supply chain will be more robust than before,” he said.

The UK is a net importer of pork, so the UK’s own external tariff regime once the UK leaves the EU customs union will play a critical role.

A free-trade agreement with the US could open the UK market to commodity pork in particular. US product is not competitive in the UK at the moment, because of the EU’s common external tariff.

There might however be an opportunity for a “quality swap”, whereby although we may see more commodity pork on UK shelves, the UK could export more high-value pork in the other direction, Mr Wyatt suggested.