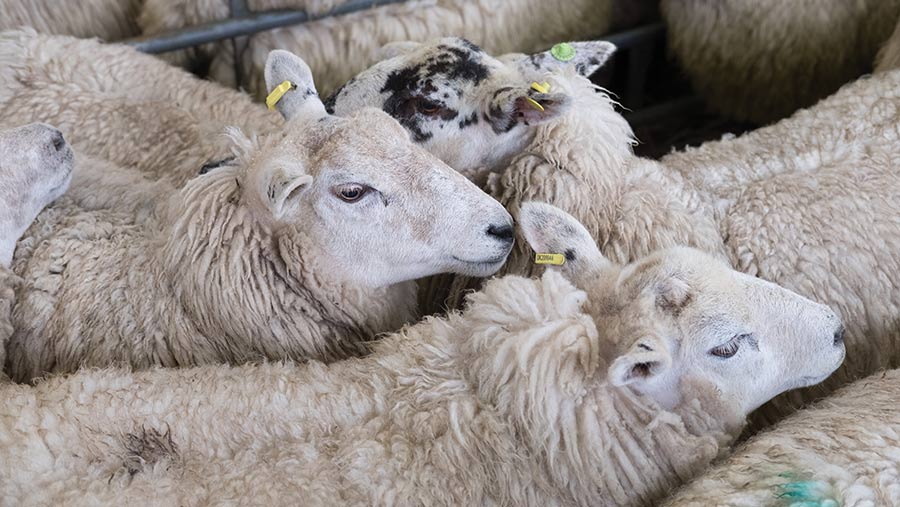 Price indications this week range from 620p/kg to 645p/kg. In live markets in the week ended Tuesday 16 March, prices rose slightly to average just above 291p/kg across Great Britain. Numbers were down 5% on the previous week, to 70,562 head.

While tighter supply means all qualities and weights are in demand, quality is very mixed as the season progresses.

Some processors are reining back their kill, possibly a combination of tighter numbers and mixed quality, said Jonny Williams of Scottish marketing co-op FarmStock.

Others are competing for lambs, so there are likely to be Easter retail promotions planned.

However, AHDB livestock analyst Charlie Reeve said as the next phase of the government’s roadmap to opening the economy only starts on 12 April, and Easter falls on 4 April, Easter demand may be subdued.

“Prices in France have dropped back slightly, which is less supportive for UK lamb, although this may now have begun to stabilise,” said Mr Reeve.

Evidence of the tighter supply comes with February slaughtering stats, which put the lamb kill for that month at 766,000 head – 8% lower than in the same month last year.

It was also 87,000 head – or more than 10% – down on January’s throughput. “Throughputs do tend to fall during the first few months of the year, with the monthly lamb kill picking up with the new-season crop in the autumn,” said Mr Reeve.

“However, throughputs this February are well below the five-year average, at 126,000 head lower for the month.”

AHDB Beef and Lamb reported that the gap between GB and New Zealand prices has widened significantly over the past few weeks – a potential draw for more imports, especially given the tight GB supply situation.

Livestock analyst Hannah Clarke said: “Reports of New Zealand exports in January and February suggest shipments could be lower to the EU and UK during the coming weeks, as more product is sent to China. This could spell further support for domestic farmgate prices.”

Effect of EU exit on exports

HMRC trade data for January was released recently and show UK exports of fresh and frozen sheepmeat in that month fell by more than 50% year-on-year to 3,400t.

This is the lowest monthly export volume since August 2007, said AHDB Beef and Lamb.

According to HMRC, volumes sent to France – the main export market for UK sheepmeat – fell by 21% to 2,300t.

“However, French customs data suggest shipments from the UK during the month increased by 21% to 3,900t,” said Ms Clarke.

“Trade data often differs between reporting countries, although this is an unusually large disagreement. It suggests that these numbers should be treated with some caution at this stage.”

Exports to Asian and Middle Eastern markets grew, including trade with Hong Kong, United Arab Emirates and Kuwait, but this was not enough to outweigh losses elsewhere.

With Easter just two weeks away, spring lambs are coming forward in higher numbers than usual at some markets, to a flying trade.

This produced an average £135.50 a head for sellers, down £2 on the week, but described by auctioneer Russell Steer as “an exceptional day for all vendors”. It followed the the previous week’s market record, which also produced more than
£7/kg on a deadweight basis.

The tight market bodes well for the switch to new-season lambs. “If prices stay very buoyant, people will kill new-season lambs at lighter weights,” said Jonny Williams, of FarmStock. This would keep the market tight.