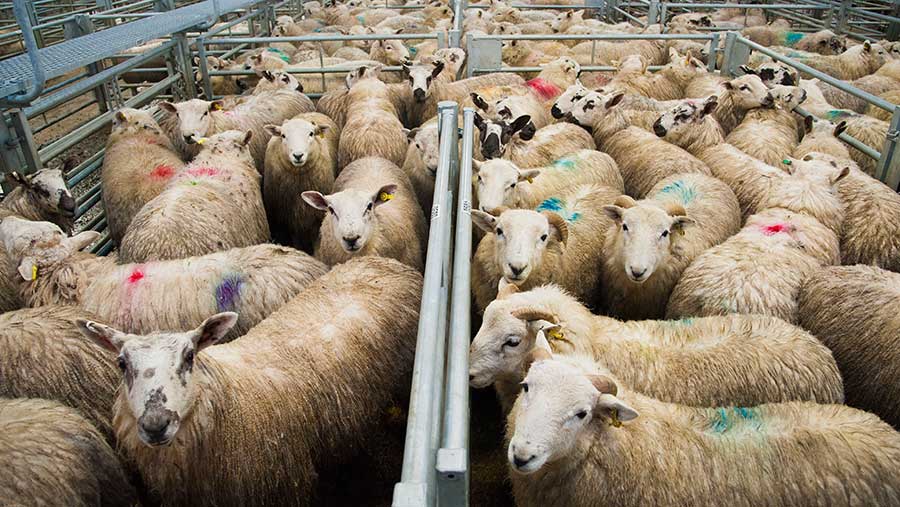 Liveweight lamb prices eased back over the past week despite lower throughputs caused by the bad weather and a general lack of supply.

According to AHDB figures, auction market numbers fell by nearly 12% to 102,400 head in the week to 26 February.

But despite the tighter supply, old season lamb SQQ prices dropped to average 234.88p/kg – down 4p/kg compared with a week earlier.

Sedgemoor Auction Centre reflected the trends with 13% fewer sheep through at 1,036 lambs and hoggs on 24 February.

Greenslade Taylor Hunt auctioneer Paul Ashton at Sedgemoor explained that prices had eased on the back of significant hikes in values over recent weeks.

“This rise was too fast and has met resistance from buyers this week, so causing prices to ease back even though numbers are down.”

Mr Ashton suggested that the tighter supply went beyond transport difficulties caused by the appalling weather and flooding across the country.

“This year’s weather is only partly to blame for lower throughputs,” he said.

“There are simply fewer numbers available on UK farms, because so many producers capitalised on the good grass growth last summer and finished lambs early.”

The 2019 lamb crop was also lower because producers cut ewe numbers back in the wake of the 2018 drought which hit grass and forage stocks, he added.

Meanwhile the AHDB has reported that deadweight prices in the week up to 22 February continued to track upwards.

In the year to date, slaughter was 59,000 head behind where it was a year ago, Mr Wyatt reported.