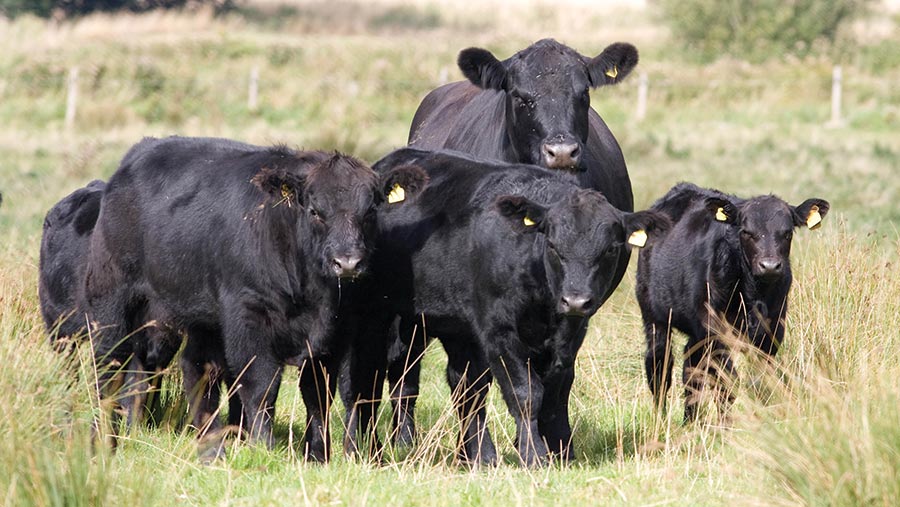 UK beef production is set to fall by 3.5% this year to 880,000t, and the herd will continue to contract, says AHDB Beef and Lamb.

Calf registrations are predicted to fall again, following a 48,000-head drop last year, says its latest beef outlook. This is expected to have an effect on beef production from June.

Having started the year 10p/kg deadweight lower than in 2018, the seasonal spring beef price dip was accentuated by Brexit uncertainty and a rise in slaughterings – particularly of heifers – prompting a steep fall from early February to mid-March.

See also: So you want to get into veal

While prices have risen since then, they still have some way to go to catch up with year-earlier levels, However they have at last reached the five-year average mark.

While supply is contracting, so is domestic demand. Consumers spent £536m on fresh and frozen beef in the first quarter of this year – 5% less than in January-March 2018.

Carcass weights had been expected to fall this year because of more females being slaughtered and a rise in the proportion from the dairy herd.

Longer term, carcass weights are expected to fall because of a higher contribution from the dairy herd, coupled with a rise in the proportion of native breed cattle.

However, AHDB cautions that Poland’s beef production and exports are rising and one of its main destinations, Turkey, has recently stopped taking Polish beef, which will push this supply back into other European markets.

Lower domestic production and, in particular, lower availability of cow beef, is the main reason for a predicted drop in exports.

The AHDB points out that the forecasts assume no material change in trade relations with the EU. Read the full report online.