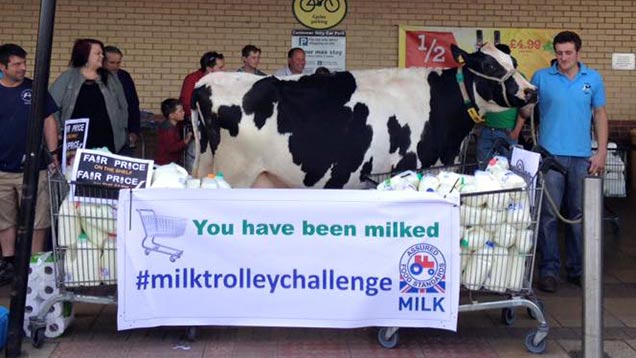 Farmers took dairy cow "Hoops Flower" from Hopps Holsteins to the protest at Morrisons in Bideford on Sunday morning.

The UK’s farming unions want the four UK farming ministers to hold a joint meeting with them to find solutions to the serious problems facing farmers.

In a joint statement the UK farming unions said they recognised that some of the problems facing producers were the result of global market conditions.

“However, we are in no doubt that the current issues are exacerbated by factors unique to the UK.

“These include dysfunctional supply chains, the predominance of the major retailers and subsequent retailer price war, pressure on markets from New Zealand lamb imports.

“UK farmers do have the potential to play an enormous part in the economic recovery of the UK and, at the same time, to provide much more of the food the country needs.

“Therefore we call on the UK farming ministers to meet jointly with us as soon as possible to identify what they can do to alleviate the very serious problems facing our industry and help the UK farmers reach their very real potential.”

The group said some of the solutions to farming’s problems lay at an EU level, which was why the UK farming unions would be attending the emergency Council of Agriculture Ministers on September 7 in Brussels.

“At that emergency meeting, UK ministers need to visibly back British and UK farmers,” they said.

The aim was to get to a place where farm businesses had sustainable incomes that allowed them to reinvest and remain competitive.

“While recent developments like the proposal for tax averaging and a more stable annual income allowance are welcome, more immediate fiscal solutions are also now needed to help with the current cashflow issues facing many farmers, including introducing more flexibility on loss reliefs.”

The presidents of the NFU, NFU Scotland, Ulster Farmers’ Union and NFU Cymru have already announced an emergency summit of farming organisations on Monday (10 August).