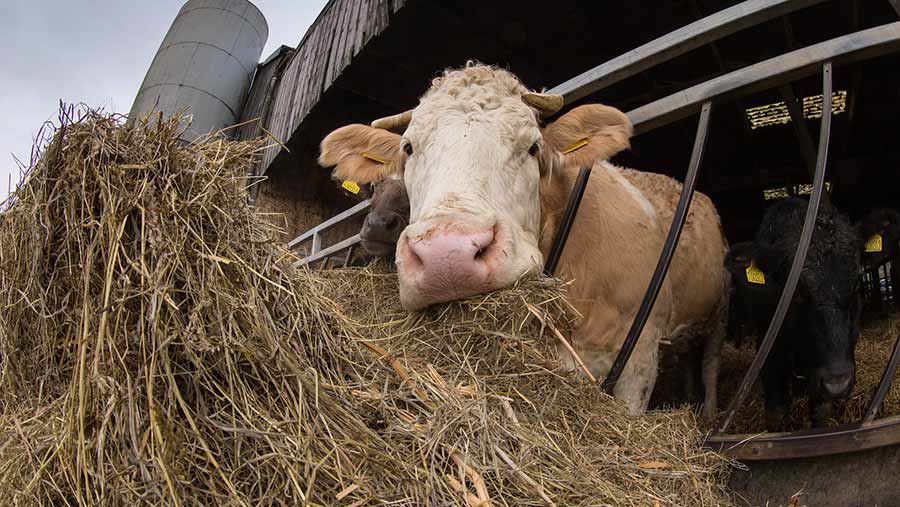 British prime beef cattle numbers are down by more than 60,000 compared with last year, according to British Cattle Movement Service (BCMS) data.

For the same cattle types under 12 months of age the figure is 15,900 head down.

The figures were reported by AHDB senior analyst Duncan Wyatt, who said that although they implied lower production would result, more would depend on any changes to the breeding herd size.

Auctioneer Mark Richardson reported that suckler cow producers have been scaling back.

Mr Richardson, who is based at Harrison & Hetherington’s Kirkby Stephen office in Cumbria, said that poor margins were forcing farmers to act.

“While whole herd dispersals are extremely rare, farmers have been cutting back on herd size.

“Specialist suckler herds on hills and uplands are the most likely to be reducing numbers,” he suggested.

Many of them are relatively small 30-50 cow units, which would normally buy in up to five replacements each year.

But there is generally a shortage of breeding stock coming forward, so prices have held up well.

“It makes it harder to justify spending out on a relatively high-value animal when the beef price is so low,” Mr Richardson said.

The result is producers have bought in just one or two replacements this year, rather than the three to five that would be the norm.

“Even though these are small numbers on a herd basis, the practice is so widespread the changes are adding up to a big reduction in suckler-bred beef coming through,” he said.

In contrast, dairy-bred beef numbers had been holding up, as milk producers have switched to using sexed semen in recent years, Mr Richardson said.

However, a recent report by AHDB Dairy suggested that the upward trend towards using beef semen to add a margin to dairy-bred beef may be about to change.

AHDB analyst Jennie Tanner reported that an annual farmer survey showed sexed semen usage accounted for one in three inseminations on dairy farms in the year to April.

That is double the rate used five years ago.

But data since April this year suggests that the use of beef semen has started to drop away again, while the use of sorted dairy semen has continued to increase.

“This could well be that in response to the current poor beef price, with returns for finished cattle low, farmers may be reluctant to put their cows in calf to a beef animal anticipating poor returns,” said Ms Tanner.

Meanwhile the use of sexed semen in the dairy sector has been suggested as the reason for a stabilisation of milking herd numbers after years of decline.

AHDB Dairy analyst Felicity Rusk said BCMS data showed 362,000 dairy females were registered in the year to September, the same as in 2018 and 2017.

“In July, there was a 1.0% decline in the youngstock population compared with the previous year,” Ms Rusk pointed out.

In comparison, a year earlier, the youngstock population recorded a 3.6% decline in numbers.

She said the relatively stable female dairy cattle registration figure was likely a reflection of the increased usage of sexed semen.

“Sorted semen now accounts for a third of dairy inseminations. As such, this is counteracting the contraction of the milking herd,” Ms Rusk said.

While it will be some time before these females enter the milking herd, the data suggests that we could see some stabilisation of the size of the milking herd in the future, she added.