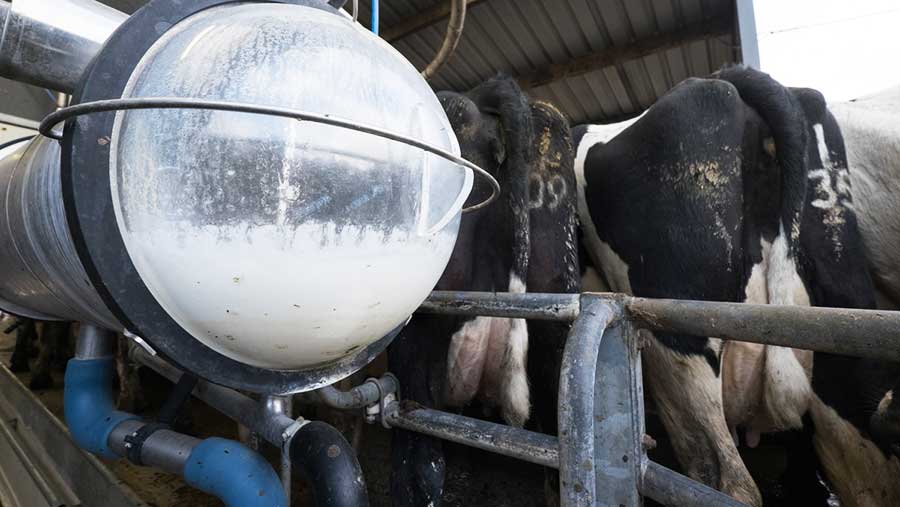 Dairy farmers’ margins will only get more disastrous, a new report has found.

Consultant The Dairy Group says the average farmer’s margin over purchased feed has plunged 24% since May 2014 to reach £1,507/cow in January.

The average milk price fell almost 6p/litre to 25.2p/litre in the 12 months to January 2016. But the cost of purchased feed dropped just 1.2p/litre.

The Dairy Group managing director Ian Powell said the pain was not over after 16 months of sliding margins.

He warned farmers had to be careful cutting back further on farm, as inputs like feed and fertiliser were essential for a profitable farm and healthy animals.

Producers could push suppliers harder for price reductions, even if they were loyal customers, Mr Powell said.

Worst yet to come

“The worst has yet to come, with the spring peak in April to June likely to see a further reduction in average milk price as the seasonal penalties and ‘B’ priced milk drops the average even further.

“Most businesses can find efficiencies, but there is a danger they will cut things that will hurt their source of revenue and drive their business into the ground.”

The results come from The Dairy Group’s costings service MCi, which gathers data from about 200 farms with an average herds size of 212 cows.

They also reflect the increased milk production on British farms.

Mr Powell said it was “fundamental” that farmers understood how their milk was priced and paid for.

He said some of the “A” and “B” contracts were insidious, as any attempt to reduce surplus milk this year could mean lower “A” volumes the year after. This made it difficult to work out the marginal benefit of pumping out “B” litres.

“The milk price payment systems have become ever more complex and there is an urgent need for dairy farmers to properly understand how the milk payment system works and how to get the best out of a very difficult situation.”