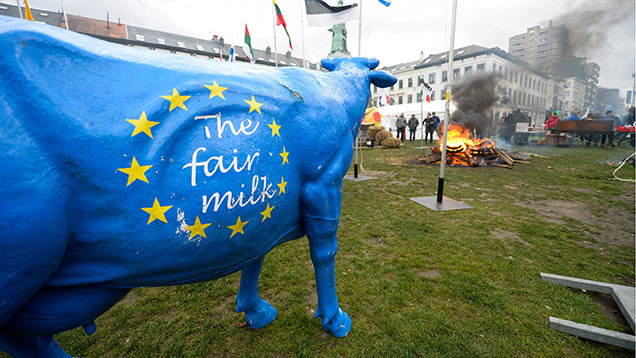 Dairy farmers can expect a severe loss in market power and chronic milk price slumps following the end of quotas, the European Milk Board (EMB) has warned.

Politicians had failed to put suitable market instruments in place to prevent a crisis following the abolition of the milk quota system on Tuesday (31 March), the EMB said.

Dairy farmers from across the EU protested outside the European Parliament in Brussels on Tuesday with a solemn vigil, a warning fire and funeral march, to point out to politicians their “derelictions of duty”.

The EMB believes it is most likely that dairy farmers in many EU countries will step up production in the post-quota era – without the market being able to offload the whole volume in any reasonable way.

The warning was made despite a recent European Commission report saying “no surge in milk production is expected in 2015”.

The EU milk quota system has been in place for 30 years. But EMB president Romuald Schaber said without an effective crisis instrument, the future of the milk sector looked bleak.

Producers in individual countries would have to cope without any regulatory framework and he predicted big food companies, such as Nestle and Danone, would “fill their boots”.

“Prices will be rock-bottom, as Europe’s farmers will have even less market power to achieve a cost-covering milk price in the future,” warned Mr Schaber.

“Prices will be rock-bottom, as Europe’s farmers will have even less market power to achieve a cost-covering milk price in the future.”
Romuald Schaber, EMB president

Over the past 12 months, dairy farmers across the EU have been struggling to cope with rock-bottom milk prices.

In the UK, the milk price crash over the past year has seen prices tumble by more than one-third from highs of 34p/litre in the spring to below 20p/litre in some cases.

“Chronic price collapses are inevitable, the next crisis is on its way,” said Mr Schaber.

In the event of a crisis, the EMB has called on Brussels to implement a market responsibility programme (MRB).

On the other hand, those who produced more – despite heavily oversaturated markets – should pay a levy.

Mr Schaber said some of the money could be used from last year’s superlevy of €409m (£322m), raised through milk quota fines for countries that exceeded their limit.