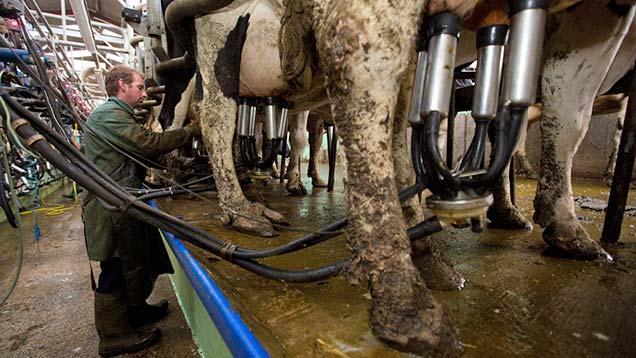 Petitions demanding action to help battling dairy farmers are springing up across the internet, making demands that range from a minimum milk price to the reintroduction of the Milk Marketing Board.

Chris Charles, a dairy service engineer from the south-west of England, has set up a petition calling for the introduction of minimum prices that milk buyers pay to farmers.

“The company I work for is a huge influence in the dairy industry in the South West, and this year has seen a dramatic drop in work for us and other companies alike,” he said.

“Farming is the backbone of the UK and anything that happens to the farming community in the UK has a ripple effect and has a huge consequence on the other industries that thrive on this backbone.

“We see on local news, weekly if not daily, how much of a struggle farmers have trying to produce milk with a minimal margin for profit.”

Under the guidelines of the site, once more than 10,000 signatures have been secured then the government must respond to it, although this is yet to happen.

If 100,000 signatures are collected, the government will “consider” the subject for debate.

A separate petition on the website 38 degrees calling for farmers to be paid a fair price for their milk has secured close to 50,000 signatures.

Comments submitted by signatories include: “It’s important that we do not lose our dairy farms. They provide a vital service keeping farmers in work and our countryside in grass. I would be more than willing to buy milk at a higher price if it guaranteed farmers a fair wage.”

Another respondent added: “I am happy to pay more for my milk if it means our dairy farmers can stay in business. Why not give us a choice and offer a fair price range?”

Meanwhile, Tom Warren of Prism Agriculture is seeking support for his fledgling petition calling for the reintroduction of the Milk Marketing Board (MMB).

The petition is not yet publicly available, as it needs a certain level of support before it will be included on the government’s petition site.

But Mr Warren is calling for the reintroduction of the MMB to promote stability and sustainability in British agriculture.

He also wants to introduce a fair and reasonable minimum price above the cost of production.