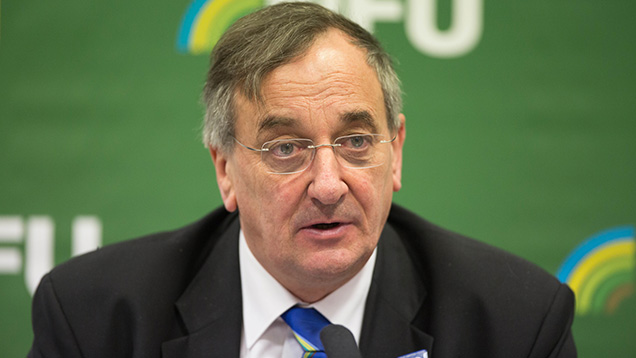 More farmers will quit dairy farming unless urgent action is taken to stop the slide in milk prices, the head of the NFU has warned.

NFU president Meurig Raymond, who took part in a peaceful protest organised by the NFU/FFA against Morrisons in Cheshire on Thursday night (6 August), said the current crisis crippling the dairy sector was “far worse than the dairy crisis of 2012”.

He called for urgent action at government level – both in the UK and EU – to prevent more farmers exiting the industry in droves.

“People are desperate at the moment. It’s a lot worse than in 2012,” said Mr Raymond.

“The price is lower now than in 2012 and many dairy farmers have invested heavily in their businesses, putting in new milking parlours and they are servicing that debt.

“The product will be required over the next number of years. But my fear is once you get out of dairy farming, you never go back.

“It’s psychological. When people get out of dairy farming, they realise how hard it is. They put all that effort in for no return.”

According to the NFU, an estimated 1,000 dairy farmers have left the industry over the past two years, with about 50 giving up producing milk every month.

As a result, there are fewer than 9,950 dairy farmers left in England and Wales – and that number has more than halved since 2002.

Mr Raymond said: “The majority of the farming sector is struggling. These are desperate times, not just for dairy or lamb, but also for people who are combining barley at £100/t.

“But in the next 20-30 years, more food will be required. In the meantime, the industry is being strangled.”

Mr Raymond was among 600 people who took part in a mass protest outside a Morrisons milk depot in Middlewich, Cheshire, on Thursday night.

The protest, organised jointly by the NFU and lobby group Farmers For Action (FFA), was held to highlight the crippling effect low milk prices are having on farmers, their families and businesses.

“It is absolutely ridiculous that milk has dropped below the value of water,” said Mr Raymond.

“Milk is a food product. It should be high value. Shoppers in general tell us they would pay more for their milk.

“In the liquid milk sector, if you look at Tesco and Sainsbury’s, they are using a pricing mechanism which pays a price for milk they buys which reflects the cost of production for farmers.

“But half of the retailers [including Morrisons] have not got a pricing formula in place that pays a milk price that at least covers the cost of production.”

Mr Raymond called on Morrisons and other retailers to “get a grip” and do more to help dairy farmers before it is too late.

“Morrisons is doing a fantastic job on red meat and poultry. Let’s do the same for the dairy farmer,” he said.

“It needs to be more transparent on liquid milk, in particular.”

Morrisons sources most of its milk from processors Arla and Dairy Crest, which have both dropped their wholesale milk prices in the past week.

According to AHDB Dairy, however, it costs farmers 30-32p to produce a litre of milk.

Commenting on the talks, Mr Raymond said: “I am reasonably confident we will have some sort of pricing mechanism in place to make sure more money gets back to dairy farmers.”

A spokesman for Morrisons said: “We are disappointed with the disruption being caused to our stores and our customers.

“We recognise that the current issue is being caused by a reduction in global demand for milk that has led to an oversupply in the UK and very difficult conditions for many dairy farmers.

“We want to reiterate that we are not seeking any further reductions in milk prices and we will continue our talks with the NFU, in a constructive manner, to finalise our agreed plan of action.”