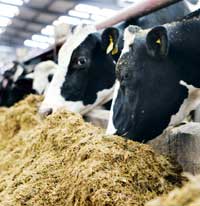 Dairy producers’ margins shrunk in January, compared with the previous month, but were almost 3% higher than in January 2010.

The latest results from Promar‘s Milkminder costings reveal that milk prices averaged 26.02p/litre in January – 0.88p/litre above the previous year, but 0.66p/litre lower than December. Milk yields averaged 26.3 litres/day – 5.2% up on the year and 1.9 litres higher than in December.

Annual rolling results were pegged back due to January’s poor financial figures, but are still some way ahead of the same time last year.

The rolling milk price averaged 25.31p/litre, with milk yields increasing by almost 4%, to 7956 litres a cow. Although feed prices have risen considerably, producers have achieved more milk from forage, enabling the margin over purchased feed to rise by 1.21p/litre, to 18.86p/litre.