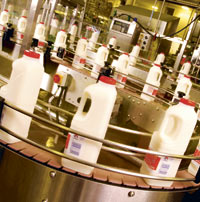 Liquid milk processors have failed to pass on higher bulk cream prices and farmers have been urged to demand a price increase.

Bulk cream values have almost doubled since February, from £750/tonne to £1,350/tonne in September. That is equivalent to a 3.4p/litre increase in processor cream income, from 4.25p/litre in February to 7.65p/litre in September, DairyCo suggests.

But, Robert Wiseman Dairies is the only processor to have passed any of this increase back to farmers so far, with a 0.3p/litre price rise in August. Its main rival processors Dairy Crest and Arla have failed to increase their prices, despite blaming weak cream markets for milk price cuts earlier in the year.

“Any farmer supplying a liquid processor should be demanding a price increase,” said NFU dairy board chairman Gwyn Jones. Even Wiseman suppliers have legitimate reason to expect a further price increase, he said.

“No doubt buyers have been holding out to see what Tesco would do, but with the price review only resulting in a slight drop, Tesco’s liquid price is still at the top of the league table, leaving these processors nowhere to hide.”

Wiseman spokesman Graeme Jack said the company was keeping its price under review as it waited to see what others did. “We’re already 0.3p/litre adrift of our rivals in what is a very competitive market, especially for ‘middle ground’ milk. We are a commercial organisation and cannot afford to be out of step with the market,” he said.

“The pressure is really on for farmer representatives to ensure that milk buyers are increasing prices in line with the market,” Mr Jones added. “Farmers need to be demanding that their representatives deliver.”