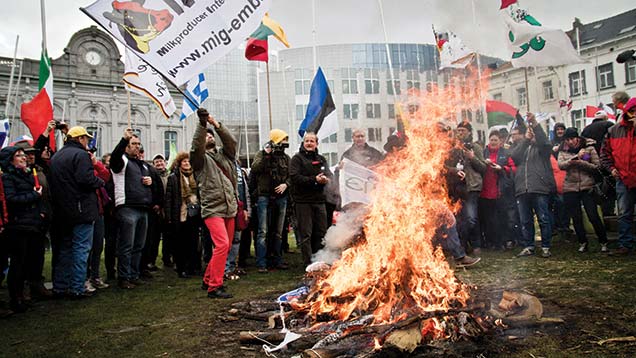 European milk producers and dairy processors are divided over the impact of the quota abolition.

Dairy farmers from across the EU protested outside the European Parliament in Brussels (pictured) on Tuesday (31 March), warning that they would soon face rock-bottom prices time and again, with many producers “catapulted” out of the sector.

EMB president Romuald Schaber said: “Conglomerates will dictate terms and conditions to the farmers even more than before. Prices will be rock-bottom, as Europe’s farmers will have even less market power to achieve a cost-covering milk price in the future.”

He said: “Increased market transparency is key since it will allow all players in the dairy sector to take the right business decisions and, consequently, to better manage the price and cost volatility, which is and has always been a natural market phenomenon.”

Politicians, dairy farmers and milk processors had been preparing for the end of quotas since 2003, said Mr Anton.

The time has come for a prosperous and dynamic dairy sector driven by the realities of the global market,” he said.

Irish farmers are more optimistic than UK milk producers at the end of quotas – and believe they are well placed to capitalise on rising global demand for dairy products.

With world demand expected to grow significantly over the next few years, the abolition of quotas was a real opportunity for Ireland to sustainably increase milk production, said Irish Farmers’ Association (IFA) dairy chairman Sean O’Leary.

“Farmers are undoubtedly excited at the prospect of being able not only to grow their milk production, but also to better run their farms without the counterproductive management impositions quotas had put on them over the years.”

Ireland produces about 5.4bn litres of milk per year – and is expected to increase output by 50% before 2020.

Despite media talk of a dairy bubble, there was solid evidence that Irish dairy farmers would cautiously develop their businesses, said Mr O’Leary.

Co-ops such as Glanbia, Dairygold, Kerry, Lakeland and others had made major investments in additional processing capacity.

The Irish Dairy Board had identified new markets for existing and new products, and had already started establishing new routes to export markets for growing Irish milk supplies. Farmers had increased their youngstock numbers and invested in bigger and better on-farm facilities.