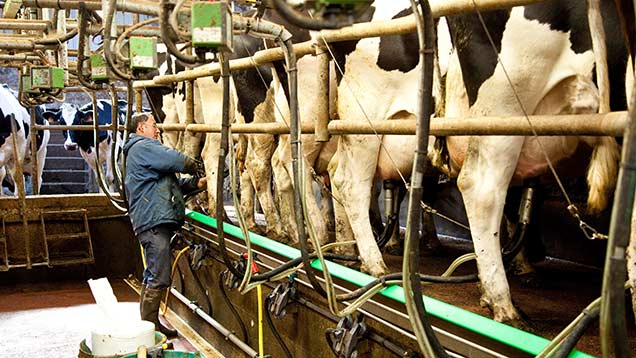 An increase in market volatility is on the cards following the abolition of milk quotas after 31 years, dairy farmers have been warned.

Production constraints came to an end across the EU on Wednesday (1 April) – the first time since 1984 that farmers have been free to produce as much milk as they feel able to sell profitably without facing a penalty for exceeding their allotted output.

Although a return to the milk lakes and butter mountains of the 1970s is seen as unlikely, NFU dairy board chairman Rob Harrison said it was difficult to predict what would happen next – both in terms of production levels and the impact on milk prices.

Some EU countries were rapidly increasing output without an end market for dairy products, said Mr Harrison. “With milk prices yet to show any strong signs of recovery, this could push farmgate milk prices down further in the EU, and stall any recovery in the dairy markets.”

UK farmers and dairy processors were rightly concerned about how other EU countries would react, said Mr Harrison. But domestic milk production had been more affected by low and volatile prices than by quotas – with the UK under quota for the past 15 years.

“Tough challenges lie ahead, especially with prices, but the long-term outlook is good, with growing demand and production opportunities,” said Mr Harrison.

The government and EU must do more to ensure a sustainable dairy future and make tools available for farmers to manage volatility.

European farm commissioner Phil Hogan said the lifting of production constraints harboured enormous potential for the European dairy market. But he too acknowledged that volatility was among the challenges brought about by the abolition of quotas.

He said: “I have no doubt that we are moving into a new era for the European dairy sector. I firmly believe this new phase will help drive growth and jobs, which will bring prosperity to rural areas and a stronger Europe for all as a result.”

Addressing the concerns of farmers who felt threatened by the end of quotas, Mr Hogan said direct payments provided to producers acted as a “safety net against volatility”.

Somerset dairy farmer David Cotton said he was happy that quotas had finally been scrapped.

Mr Cotton, who has a herd of 230 cows in Glastonbury, said quotas had restricted dairy development across the whole of Europe. “We have not been able to be a major player in the dairy market because of quotas.

“It hasn’t really affected us over the past few years because in the UK we’ve been nowhere near quotas. But if we had to go back to buying quotas it would effectively be a licence to produce milk. It’s an unnecessary extra cost.”

Over the past 18 months, Mr Cotton has expanded his herd from 180 to 230 pedigree Holstein-Friesian cows. His farm produced 1.7m litres of milk last year, up from 1.3m in 2013. In February he received 25p/litre from Arla.

If his herd remains TB free in the next couple of years, he plans to keep raising cow numbers.

Mr Cotton, a DairyCo board member, added: “Any political intervention messes up the market. We should run our business for the market and not rely on subsidies.”

Dairy farmer David Handley sees no clear signs of a turnaround for the milk sector and remains adamant that he will quit the industry this spring.

“It’s still on the cards,” said Mr Handley, who is also chairman of campaign group Farmers For Action. The business was simply losing too much money. “I have a meeting with my milk buyer at the end of this month. We will make the call after that.”

The Monmouthshire farmer runs a herd of up to 140 head, including youngstock. He supplies about 30,000 litres of milk each month to County Milk, which pays him 22p/litre – down from highs of 32p/litre last spring.

Talk of a recovery in milk prices this summer was premature, said Mr Handley. The country was importing 40% – and rising – of its dairy products.

Mr Handley announced in January, during a speech at the Semex dairy conference in Glasgow, that he was considering quitting the industry. He said his herd, milking parlour and equipment would all be up for sale in April unless milk prices showed signs of improvement.