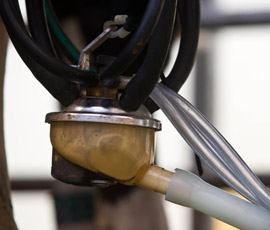 Almost one in 10 dairy farmers are considering quitting the sector in the next two years, a survey has found.

According to DairyCo’s Farmer Intentions Survey, milk producers have lost confidence in the industry over the past year, with 9% planning to quit within the next two years.

Only 32% of 1,230 UK respondents planned to increase production over the next couple of years, compared to 36% at the same time last year. “There was a noticeable increase in the proportion of farmers who were undecided on production levels two years hence, up from 5% in 2012 to 13% this year,” said the report. “This is likely to be a response to the difficulties faced during the 2012-13 milk year and the continued uncertainty on operating conditions for the upcoming year.”

Farmers highlighted high input costs, weather and milk price as most likely to impact on their businesses over the next 12 months, with 22% pessimistic about the short-term outlook against 43% who were optimistic. Producers were slightly more optimistic in the medium term, but remained concerned about input costs, milk price and retailer power.

“It’s stating the obvious that dairy farmers are disillusioned and don’t know where the future lies. We need direction and leadership in the industry, but dairy farmers are getting so many mixed messages I can understand anyone being uncertain about the future.”
David Handley. Farmers For Action

David Handley, chairman of Farmers For Action, said he was unsurprised by the results. “It’s stating the obvious that dairy farmers are disillusioned and don’t know where the future lies. We need direction and leadership in the industry, but dairy farmers are getting so many mixed messages I can understand anyone being uncertain about the future.”

Mansel Raymond, chairman of the NFU dairy board, said the code of best practice had given some confidence to farmers in terms of their relationship with their milk buyer and ability to get a better deal from the market place.

“But farmers need milk buyers to send clear messages about the value and importance of milk,” he added. “They need positive price signals now, so they can press ahead with investment decisions in response to the growth in demand we all know is just around the corner.”

Keep up with the latest news on the milk price crisis