The gap between the top and bottom of the farmland market is widening with some buyers paying up to 40% less for land in the same county.

Agents are reporting the largest disparities in arable prices in eastern England.

But it’s a trend that Farmers Weekly found evidence of across the UK, with many agents saying the gap is growing.

Ian Bailey, Savills head of rural research, said the market was currently the most polarised he had seen in 17 years at the firm.

Fear of missing out

Buyers are, unquestionably, acting more cautiously in an era of squeezed farm incomes.

Buying the block next door has always been viewed as a once-in-a-generation opportunity, but the importance of acquiring it may have increased.

Andrew Ranson, associate partner at Stags in Cornwall, said: “Many buyers are cautious of making significant investment due to Brexit uncertainty.”

He said the more active buyers were those with local opportunities.

He used the example of 112-acre Heale Farm, near Launceston, which sold well in excess of its £1.495m guide price, while just 10 miles away land near Bratton Clovelly was reduced in price in order to sell.

In Cumbria, H&H Land and Property associate director Will Parker said: “The extremities seem to be more common with blocks of arable land where the land quality varies regionally and the number of active buyers in the market is often very localised.” 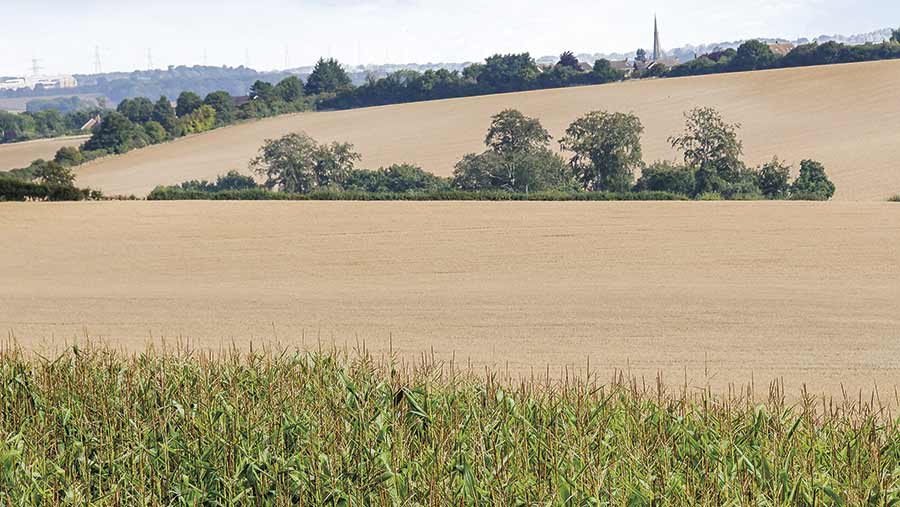 A £7.5m guide price has been set by Savills for the 715-acre Shortgrove Estate in Saffron Walden, Essex.

It has 534 acres of Grade 2 arable land and grassland which is currently put to wheat, oilseed rape, winter barley, linseed and winter beans. The balance of the acreage is in woodland.

Farm buildings include a triple-span Dutch barn plus a walled grain store.

A nine-bedroom house is included and a diversified income stream comes in the form of four further cottages that are rented out, plus a cricket bat willow sideline.

The main causes of this are location-driven, with land in the more desirable areas with pent-up demand still achieving strong returns, while values have continued to soften across secondary areas.”

Mr Gooderham added that the difference between Grade 1 arable land in a desirable area and a more remote similar-sized block of lesser quality could now be as much as £4,000/acre.

Similarly, Jim Major, a partner with Brown and Co in Norfolk, recognises the premiums on locations.

“Popular parishes remain at premium prices and a £1,000/acre differential quite possible within a five-mile radius.”

But he added that the value of Grade 1 silt soils had still accelerated more than any other, indicating the pursuit of quality.

The rise of non-farmer buyers

The slight resurgence in the number of farmer buyers in 2016 bucked the five-year trend.

About 45% of farmland purchases were solely for agricultural purposes last year, down from 61% in 2011.

Strutt & Parker research partner Jason Beedell said: “Prices depend on the quality of the land but also on whether there are acquisitive local farmers and investors who are often looking to roll-over funds from the sale of residential development land.”

The “right” opportunities to invest may be scare, so sellers may profit from having one of the only quality offerings on the market, sparking high levels of interest.

Similarly, capital-limited buyers may snaffle a bargain in a market where genuine farmer purchasers are limited.

Charles Dudgeon, farm sales director with Savills in Scotland, has recently seen a £5m farm sold where the top three bids were £1m more than the lowest.

“There are different perceptions from farmers in the future of farming and the structure of their own businesses,” he said, adding that farmers were asking themselves whether they needed to buy land or whether it would just be good to have.