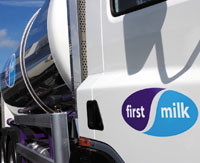 Dairy co-operative First Milk has appointed two new farmer directors to its board.

Richard Davis milks 110 cows in Bedfordshire and is vice-chairman of levy body DairyCo. He also sits on the NFU’s dairy board.

Hugh Parker farms in a family partnership with wife Maureen and brother John on a part-owned/part tenanted 430-acre unit near Stranraer. His dairy herd produce 1.9 million litres of milk per annum. Since 2003, Hugh has been First Milk’s local representative serving the Stranraer area.

Director Mike Gorton has been re-elected. Mansel Raymond is to step down from the board of First Milk, but remains the local representative for north-west Pembrokeshire.