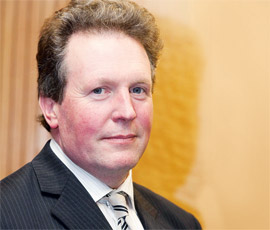 Newly-elected NFU vice-president Adam Quinney has pledged to modernise the way the union communicates with its members.

Speaking to Farmers Weekly following his election last week, the Warwickshire beef and sheep producer said he had been impressed with the breadth of work undertaken by NFU staff at the union’s Stoneleigh headquarters. “To be involved is really a massive responsibility,” he said.

Harnessing new technology – from social media to video conferencing – to improve communication would ensure that the union’s work benefited more members and reach a much wider audience, said Mr Quinney. It would also save time and money.

“We need to allow members who haven’t got the time – because they are running their business or have a young family – to communicate more quickly. You can’t expect people to spend a whole day travelling to Stoneleigh from Cornwall or Northumberland for a one-hour discussion.”

“There’s no one golden bullet when it comes to good communication – it’s making sure you communicate with people in a way they like. Some people prefer to read a magazine, others prefer the internet. We must make sure we communicate with members in a way that suits them.

“I have a vision of somebody getting off their tractor in Cornwall after working on the farm. They can walk into their farm office, plug in the computer and talk to Stoneleigh for half an hour and then put their wellies on and go straight back out on the farm. They are the people I want to reach.”

Mr Quinney said he was not knocking anyone already involved with the NFU. “I don’t mean that at all. But I want people who have the expertise and enthusiasm for the industry to be involved, rather than those who have expertise and the time – it’s about getting the broadest view possible.”

The first member of the NFU top table to embrace social media, Mr Quinney said he intended to continue using the micro-blogging website Twitter during his vice-presidency – not just to comment on topical issues, but to highlight the work he was doing on behalf of NFU members.

Married to Sarah, with three children all in their twenties, this week saw Mr Quinney helping out with TB testing before heading to Stoneleigh. The family beef herd at Sambourne, near Redditch, has been shut down for more than a year with bovine tuberculosis.

“One of the advantages of living close to Stoneleigh is that most days I will have my boots on. This morning I was at the farm at half-past-six looking at the cattle before coming here. Being so close to Stoneleigh will keep me grounded when it comes to the day-to-day realities of farming.”

His children are “interested but it’s too early to say” whether they will return home to farm. “We’ve always encouraged them to do what they want to do. I wouldn’t want them to come farming just because mum and dad did. Besides, I think they’d like me to get a bit closer to retiring first.”

Tribute to supporters and predecessor

Beef and sheep producer Adam Quinney has held various NFU posts. They include branch chairman, council member and regional board chairman. But he has not been a commodity board chairman – often seen as the usual route to the NFU top table.

“The election was good news – not because they elected me but because it shows that the NFU council is not a closed shop and that they were prepared to elect somebody who was, in essence an everyday member. I was on council for six years, but not at the time of the election.

“I hope it encourages other people who have the skills, time and commitment to think about promoting themselves within the union.”

Paying tribute to his predecessor, Sussex farmer Gwyn Jones, Mr Quinney added: “My election shouldn’t deflect from the good work that he did, including the bold step of moving the annual conference to the centre in Birmingham, and I hope to continue the work he was doing.”