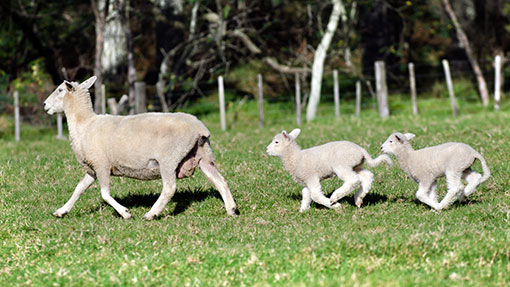 New Zealand’s sheepmeat exports to China have grown rapidly but less has been shipped to Europe.

The country’s sheepmeat exports increased 9% to 143,300t in the first three months of this year and shipments to China were up 38%, EBLEX research has revealed.

“As New Zealand retreats from Europe to China, it leaves a vacuum for us to fill,” he said.

“When you see less New Zealand produce on the French and German market with the same level of demand, [those buyers] are going to come to the UK and Ireland.

“It is providing support for prices, a bottom to the market and more consistency because we have seen a lot of volatility.”

China has become New Zealand’s biggest customer, as its share of the country’s sheepmeat exports has jumped from 7% in 2010 to 44% today, while the EU’s share has dropped from 46% to 33%.

The Chinese are also buying better-quality products, with the import of New Zealand carcasses rising from almost none at the start of 2012 to more than 18,000 in the first quarter of this year.

“New Zealand exports are still quite subdued on historical levels, but when you look at the rise of China, that is a massive deal,” Mr Heyhoe said.

“Historically, China used to buy worse-quality stuff and they are now buying a lot more carcasses.

“That adds more demand and it lifts the value of better-value cuts.”

Supplies from New Zealand are forecast to be tight for the 2013-14 season, with volumes expected to be down 5% or 1.1m head on the year before.

In contrast, the UK lamb kill in 2014 is forecast to be 3% higher on the year at 12.86m head, due to better weather and a larger breeding flock.