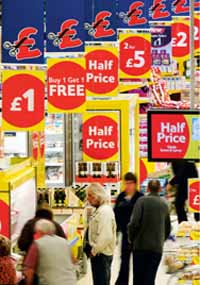 The proposed supermarket adjudicator is unlikely to be in place until late 2013 and runs the risk of being toothless unless enforcement measures are toughened up.

Speaking at the Royal Cornwall Show this week (9 June), NFU deputy president Meurig Raymond said the Groceries Code Adjudicator Bill was unlikely to be brought before Parliament until October 2011. “It could easily be the end of 2013 or early 2014 before it is in place.”

However, the role of the adjudicator was not to boost farm prices, warned farming minister Jim Paice.

“It is to enforce the retailer code of practice; it is about the terms of trade, not prices. We need to leave the market to sort itself out – the government’s role is to make sure the market is working as fairly as possible.”

However, unless enforcement measures were tightened up, the current proposals would not deter supermarkets from bullying suppliers, said Jeremy Best, Cornwall county chairman at the NFU.

“Supermarkets have taken over most of the grocery trade and command too much power. This is why we need an adjudicator with teeth to help restore the balance for suppliers, not just someone who is politically correct and paying lip service to it,” said Mr Best.

He echoed a call by West Cornwall MP Andrew George to speed up the introduction of the adjudicator, and demanded more monitoring of supermarket behaviour and greater protection for complainants who feared being blacklisted.

Mr Best said farmers and growers were not seeking special treatment, simply fair play, and claimed supermarkets were currently getting away with “blue murder”.

“I sell independently and am in constant dialogue with my buyers sorting out issues, which is a two-way process. But that is not the case with supermarkets – people supplying them simply have to do what they are told.”

“The milk situation is desperate – the market isn’t working as it should.

It’s very important that the government takes on board the recommendations of the Higher Level Dairy Group, to create fairer contracts. Otherwise, we’re going to destroy an extremely important industry in the UK.

“Hopefully the adjudicator will lead to longer term contracts, to enable the industry to invest, increase productivity, and secure supplies for the consumer,” he added.