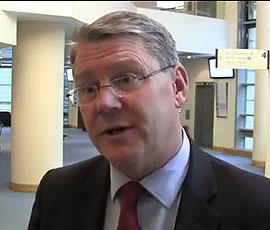 NFU president Peter Kendall has called on farmers to forge a pact with consumers and help create a fair, transparent and safe supply chain for British food.

Mr Kendall delivered what he described as “perhaps his most critical message” as farm leader to NFU annual conference on Wednesday (27 February).

In his keynote conference speech, Mr Kendall said three initial lessons should be drawn from the scandal that saw beef products contaminated with horsemeat.

“First, we’ve learnt that it’s nonsense when retailers claim they can sell eight beefburgers for a pound and maintain complete transparency about what’s in their products and where it comes from.

“Second, it’s clear that the longer a supply chain and the more borders it crosses, the less traceable our food is and the more the chain is open to negligence at best, fraud and criminal activity at worst.

“Third, the great British consumer prefers to know they are eating great British food; food produced with passion and pride by British farmers and growers.”

That boiled down to a clear and simple message, said Mr Kendall.

“We need shorter supply chains which source from British farmers and growers. What do I mean by short? I mean as simple as possible:- Farmer – processor – shop.”

But if British farmers were to deliver more of the food bought by British consumers, it was going to take a major shift in the way the food chain operated.

Referring to the horsemeat scandal, Mr Kendall said the recent appointment of a supermarket ombudsman would deal with only one aspect of supply chain relationships.

“It’s not enough to put right the flaws in the chain that have come to light over the last few weeks. I know I speak for all farmers when I say that I am furious about what has happened.”

British farmers had invested a lot of heartache and a lot of hard work and cost to produce the best beef since the days of BSE and foot-and-mouth but were rightly proud of what we’ve achieved.

“We now need supermarkets to stop scouring the world for the cheapest products they can find and start sourcing high quality, traceable, product from farmers here at home.”

“I hope it will mean fewer marketing campaigns dressing up foreign imports with a homely British-sounding name in the hope the consumer won’t notice it’s not British.”

Farmers knew British consumers preferred to buy food that came from as close to home as possible – a fact backed up by an NFU OnePoll survey should 90% wanted to buy British.

Mr Kendall said farmers also recognised that price was an issue for many consumers. But he insisted that his message was emphatically not elitist.

“For our part, as British farmers, we are working hard to make sure you can buy traceable British food, produced to high standards, at all price points. That’s our commitment to you.”
In return, Mr Kendall urged consumers to buy British.

“First, we want you to buy British. Start by looking for the red tractor logo; it stands for traceable and independently inspected food – from farm to pack.”

“Demand answers from the people you buy from – supermarkets, butchers, restaurants, pubs, farm shops, farmers’ markets: where was the food sourced, is it local, how was it produced, what’s in it?

“If you’re buying British, we’ve a great story to tell.”

News from the NFU conference 2013