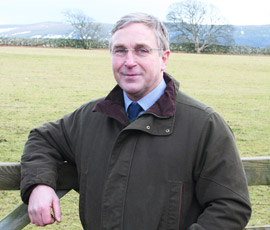 NFU Cymru has re-elected its senior officeholders to serve another two- year stint.

Ed Bailey, a beef and sheep farmer from Meirionnydd, will serve a further two years as president after a vote at the NFU Cymru Council on Tuesday (17 January) while his deputy, Pembrokeshire dairy farmer, Stephen James, will continue in his role as deputy president.

Mr Bailey said the past two years had been rewarding but admitted they had also been challenging.

Tough challenges lay ahead also, he added, including the continuing fight against bovine TB and the proposals to reform the Common Agricultural Policy.

His deputy farms in partnership with his wife, Joyce and his son, Daniel, in Pembrokeshire.

Mr James said his role as deputy president had made him realise what a vital role NFU Cymru played as a lobbying organisation in Wales.

“Politics plays a large part on our home farms, something I didn’t appreciate as much before taking on this job,’’ he said.