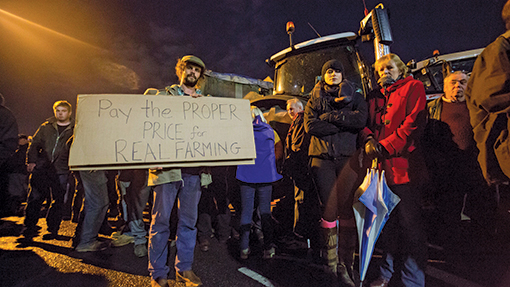 One of the country’s most politically prominent milk producers has warned that the growing division in the industry over protests by Farmers For Action could lead to similar splits faced by Britain’s miners 30 years ago.

NFU Scotland dairy committee chairman Gary Mitchell told Farmers Weekly it was vital the dairy industry united in its approach to the crisis.

“If we’re not careful we’ll end up as divided as the miners, with those who don’t want to take industrial action being branded as scabs,” he said. “There’s a lot of pressure on the system and I don’t agree with blockading factories and adding extra expense to processing plants.”

But Mr Mitchell said the industry had to be firm with retailers. He favoured “blitzing” customers in supermarkets with leaflets explaining the desperate situation and appealing for their backing in buying branded produce to help resolve the crisis.

NFUS president Nigel Miller agreed that it was essential to highlight the issues to the general public and said the union was ruling nothing out at this stage.

“Taking action without having a goal is pointless. We need a focus for change and will be discussing possible initiatives at further meetings in the next few days.”