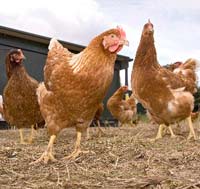 The figures, released by DEFRA last week, cover the period to the end of 2008.

Organic Farmers and Growers explained that the dip was due to cost-conscious shoppers looking to cheaper alternatives to organic eggs and chicken.

Its chief executive Richard Jacobs said: “Organic food and farming has recently woken up to the fact that it hasn’t marketed itself very well, with shoppers holding very mixed views on why they should buy organic food.

“A new industry-wide initiative, OrganicUK, is now under way to pull together a national marketing campaign for the sector, supported by match funding available from the EU.

Mr Jacobs added: “There are many positive aspects to organic food and its production. What we need to do now is spell these out clearly for the consumer so that they can clearly understand what organic food and farming has to offer to them, the environment and the welfare of farm animals. OF&G has committed to supporting OrganicUK and we’re urging everyone else in organics to do the same, for the benefit of the whole sector.”