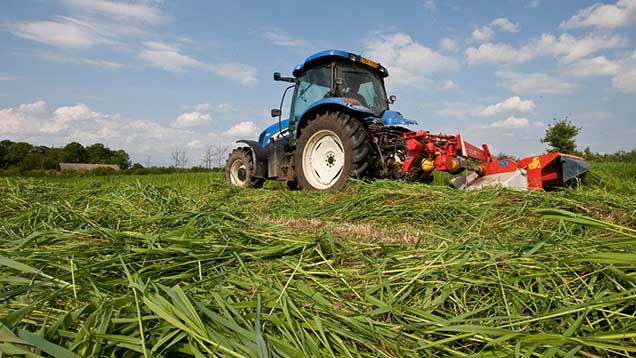 A last-minute rush is expected as farmers and agents struggle to complete CAP Basic Payment applications ahead of deadline.

Most of the 86,000 eligible farmers in England were due to start their Basic Payment Scheme paper form applications this week, the NFU said.

The Rural Payments Agency (RPA) said it had now issued all pre-populated BP5 application forms. About 4,000 farmers with common land were expected to receive their forms this week.

RPA customer director Justin Chamberlain said: “Farmers should now have received their forms. I would encourage them to complete their application as soon as possible and not wait until the 15 June deadline.

“We have a range of support available if farmers need help, such as through our helpline, or at any of the 50 support centres across the country, to ensure farmers and their agents get the help and advice they need to make their claims.”

Mobile support units will be visiting four agricultural markets to support farmers with their applications:

The NFU warned farmers to check their land data on BP5 forms amid reports that the pre-populated data may be different to that used for SPS 2014.

“Ensure all your land parcels are present and correct, make sure the areas claiming on and the eligible area for a field is right,” said Richard Wordsworth, NFU senior adviser on the Rural Payments scheme.

“There is no substitute to checking every line of field data carefully.”

NFU vice-president Guy Smith said the union remained concerned about the vast numbers of RLE1 forms being generated due to Defra’s request for farmers to map all permanent ineligible features.

He encouraged farmers to get on with their applications and submit them well ahead of the 15 June deadline.

Meanwhile, European farm group Copa-Cogeca has called for a lenient approach to CAP rules in their first year of implementation.

It said it was “unacceptable” that farmers risked losing their entire support payment due to small errors when applying environmental greening measures.

* Anyone who has not received their form, either by email or post, or their pack to update their RLR maps should contact the RPA helpline on 03000 200 301. Forms can be printed out and posted within 48 hours.

NFU Scotland is urging farmers “not to delay” in completing their applications – despite improvements in the speed of the online application system.

Union leaders met with Scottish government officials on Tuesday (5 May) to highlight the need for a contingency plan if the current speed of the online system for submitting single application forms (SAF) were to dip.

Feedback from farmers and agents has led the union to question whether the system will be able to cope with the level of online applications expected between now and the extended deadline of 15 June.

With 10 days left until the 15 May deadline, less than a third of Northern Ireland’s basic payment applications had been submitted.

The Department of Agriculture and Rural Development (Dard) retained the original 15 May closing date for its scheme, which is expected to attract up to 30,000 applications.

Agriculture minister Michelle O’Neill urged claimants to apply online rather than on paper. For enquiries about the department’s single application online service, call 0300 200 7848.

The Welsh government is standing firm on its decision not to extend the 15 May deadline for applications.

It means farmers must submit their single application forms (SAF) within the next week to avoid penalties. NFU Cymru president Stephen James said forms were taking twice as long to complete because they were so complicated.

To support applicants, the government has increased access to frontline support staff by extending opening hours at government offices at Carmarthen, Llandrindo Wells and Caernarfon.