The Rural Payments Agency has been lambasted for its “staggering incompetence” in handling the administration of single payments.

A cross party group of MPs slammed the agency for wasting more than £600m of tax payers’ money in unforeseen administration costs, overpayments to farmers and fines.

Branding the RPA’s three-year handling of the scheme as a “master class of misadministration”, the committee of public accounts said disastrous IT systems and stressful delays for farmers awaiting payments meant the agency’s managers should “hang their heads in shame”.

Edward Leigh, MP and committee chairman, said the agency had imposed a much more complex payments system on English farmers than any other country.

“On top of that, it now costs almost £2000 per person to administer each claim. It’s staggering,” he told a meeting on the progress of single payment administration in London on Monday (26 October).

It had cost the agency £350m to administer £1.6bn to 100,000 farmers, a figure which would be “completely unacceptable” in private industry. 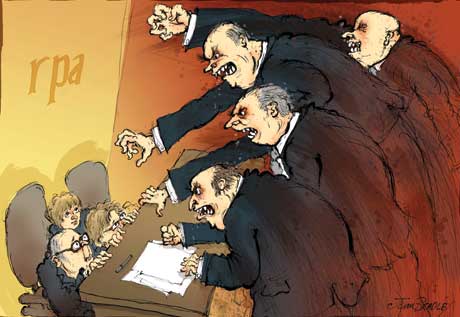 Referring to a National Audit Office Report published earlier this month, which highlighted the RPA’s failings, Mr Leigh also criticised agency chief executive Tony Cooper for failing to show leadership in what he called the “biggest debacle” in the committee’s history.

Mr Cooper admitted he had underestimated the amount of work involved with processing claims, but said the agency had worked hard to cut costs by reducing staff numbers and streamlining payment systems.

DEFRA permanent secretary Dame Helen Ghosh admitted it was “not a happy experience” having to defend the RPA’s “less than perfect service”, but said the agency had focused its attention on speeding up payments and that the majority of farmers were receiving a better service.

“The RPA is more efficient, costs have gone down and there are 3000 fewer people working in DEFRA,” she said.

“Running costs have gone down by £50m. The idea we haven’t focused on value for money, I reject.”

But Dame Helen admitted the agency had not paid enough attention to the amount of over-payments made to farmers, a figure Mr Leigh said could be as much as £90m and was unlikely to be recovered.

Mr Leigh also challenged Dame Helen on why English farmers lagged behind the rest of Europe in getting their payments on time.

The committee heard that by December 2008, 59% of English farmers received their payments compared to 87% of Welsh farmers, 83% of Northern Ireland farmers and 76% of Scottish farmers.

Dame Helen said the majority of farmers were getting their payments on a 12-monthly cycle and said questions needed to be asked over how much more money tax payers would be happy to invest to speed up the process further.

“I don’t believe there’s any argument for saying we want to pay everyone in December,” she added.

What the committee said:

Committee: “The system isn’t working for farmers. We can trust nothing the RPA says. It’s simply unacceptable.”

Committee: “I am struck by the complacency you show… You should be hanging your heads in shame.”

Dame Helen Ghosh: “It’s not a happy experience to come here and have to continue to discuss less than perfect service to farmers… but we have seen improvements.”

Tony Cooper: “We now have a better understanding of the work that’s needed to pay entitlements. I had underestimated what was involved.”

Dame Helen Ghosh: “There are 3000 fewer people working in DEFRA. Running costs have gone down by about £50m. The idea we haven’t focused on value for money, I reject.”