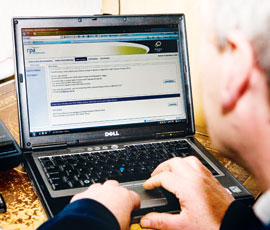 Latest figures from the Rural Payments Agency reveal it had received more than 99,481 SPS applications by 15 May of which 55,332 were made electronically and 44,149 on paper.

RPA customer services director Justin Chamberlain said: “It is great to see that thousands more of our customers have chosen to make their SPS applications electronically this year.

“People are realising that the system is quick and easy to use and that it saves them valuable time.”

The SPS application closing date was 15 May but the final number of applicants is likely to increase.

The figures released by the RPA do not include any forms submitted to drop-in centres on the 15 May and any late applications.

Online SPS forms get thumbs up from farmers