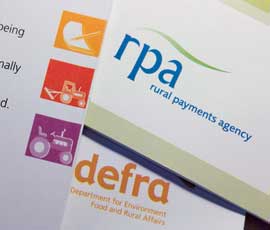 A new market is likely to develop in so-called “Golden Tickets”, the 2011 single farm payment claimant status which will allow entitlement to the new direct payments proposed under CAP reform from 2014.

The reforms allow only those who made a claim in 2011 to be allocated the entitlements under the new Basic Payment Scheme due to begin in 2014.

The biggest impact will be in the land market. The proposals allow a 2011 claimant to transfer that status by contract to another individual, for example when a farm or land is sold or leased.

Those who bought land in 2011 after the 2011 claim was submitted but before the CAP reform proposals were published will need to find a 2011 claimant willing to enter into a contract to transfer this right prior to 15 May 2014, or later if CAP reform is not agreed by then. The right can only be transferred to one party.

If a market develops, it would be a small one as there would be relatively few 2011 claimants giving up before the reforms come in and that would make it a strongish one, said George Chichester of Strutt & Parker at the firm’s Rural Land Briefing recently.

“If land is sold in a single lot to one buyer by someone giving up farming, it’s very straightforward.

But if it’s sold in multiple lots, only one purchaser can take the claimant status.”

However, Mr Chichester advised those who had bought land after the 2011 claim was made not to rush into any arrangements but to watch carefully and be poised to take action if necessary.

A change in the proposals to allow 2012 claimants to inherit the 2011 status was possible. Another option may be to put someone with 2011 claimant status in place to farm the land until the new entitlements were established, but this could be complicated.

Many sellers of land will continue farming on another holding or by retaining part of the farm and so will not want to relinquish 2011 claimant status. One of the first farms to be marketed with the SFP status specifically reserved by the vendor is Hunt Hall Farm, south Warwickshire.

The requirement for 2011 claimant status will also bring complications where a partnership splits.

• 2011 claimant status transferable on sale or lease of land

• Only transferable to an active farmer

• Only transferable to one party

• Partnership splits will have to deal with 2011 claimant status – who does it go to and should it be valued to compensate others?

• Implications for end of tenancy arrangements