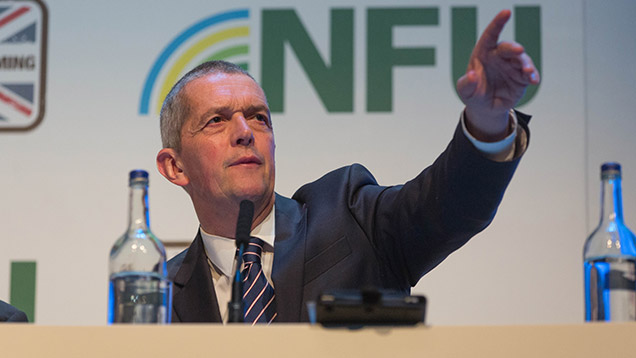 The online digital mapping service for Basic Payment Scheme (BPS) applications in England will be fully functioning by this weekend, according to the NFU.

The union said it had received a commitment from service provider the Rural Payments Agency (RPA) that all the functions of the mapping tool would be ready from this weekend.

“If this level of functionality is not successfully dropped in this week then I’m sure the mood of the NFU and farmers will heighten from one of concern to one of justified alarm.”
Guy Smith, NFU vice-president

The slow speed of the software, error messages and closures of the online service have frustrated farmers.

More than two-thirds of the 85,000 eligible farm businesses in England have now registered for BPS, with less than 10 weeks to go until the 15 May application deadline.

But while registrations have continued apace, NFU vice-president Guy Smith said members’ patience with the mapping service was “wearing thin”.

“We are facing a critical period with the clock ticking on BPS applications and farm work mounting,” he added.

“I have had good reports from NFU members on the RPA’s handling registration for the BPS.

“However, the RPA’s communications to farmers on BPS mapping has been poor. Members are frustrated that the system has been taken offline without warning, that data processing is woefully slow and field data apparently missing.”

The meeting was organised to discuss the agency’s plans to deliver a fit-for-purpose BPS application system.

“During the meeting the RPA committed to making full mapping functions available from this weekend,” said Mr Smith after the meeting.

“If this level of functionality is not successfully dropped in this week then I’m sure the mood of the NFU and farmers will heighten from one of concern to one of justified alarm.”

The RPA must deliver on its own mapping deadline as farmers expect and deserve nothing less at this late stage, he added.

“The RPA must dramatically improve its communication with farmers and agents – at this stage both need a clear timetable for delivery of new functions and what the remainder of the application process looks like so that preparatory work can take place now and applications can be prepared in good time for 15 May.”

One livestock farmer, who farms a beef suckler herd on 50ha of land outside Guildford, described problems with the mapping tool as a “complete nightmare”.

He said: “I registered for BPS over the phone, which was straightforward. Since then, I have not been able to check any of my land parcels.

“The system keeps telling me there are bits missing and asking me for more information to put in, which I don’t have.

“I rang the helpline and they told me they were hoping to have it fixed by last week, but they haven’t. If you have got a big farm with masses of land parcels, it must be a nightmare.

“To me, it’s just another Defra disaster looming, especially with the deadline for applications on 15 May.”

A Defra spokesman said: “The payment system is on track to deliver. Users are able to view maps and update their land, and the entitlement function will be available shortly.”