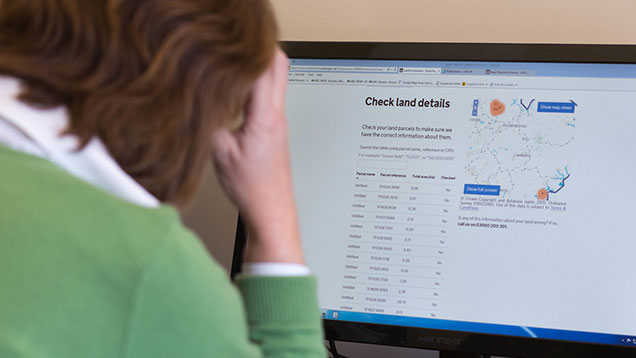 The head of the Tenant Farmers Association fears the online IT system for the new Basic Payment System is heading towards disaster.

“It is my fear that once again we are heading for carnage,” said TFA national chairman Stephen Wyrill.

With just 10 weeks left until the deadline for BPS applications on 15 May, Mr Wyrill said the “Ghost of Christmas Past” loomed large over Defra’s plans to deliver a new set of CAP rules and a new computer system to deal with the application process.

“The difference between the situation now and that in 2005 was at least most individuals 10 years ago were able to get their applications in on time and it was only afterwards that the problems occurred,” he added.

“This time we are at real risk of seeing vast numbers of individuals being unable to complete their applications on time because of the major problems of the system.

More than 50,000 of an expected 85,000 farm businesses in England had now registered for BPS. More than 96% of those registered did so by telephoning the Rural Payments Agency (RPA) rather than registering online.

Mr Wyrill said his organisation had received “countless assurances” from Defra and ministers that the lessons from 2005 had been learned and the new IT system would be fit for purpose and ready to use on time.

“The last thing we want to do is to have to use these four short words ‘we told you so’.”
Stephen Wyrill, TFA national chairman

But the TFA said it had detected that the RPA was “seriously worried” that once again, it had been set up to fail.

“The last thing we want to do is to have to use these four short words ‘we told you so’, but we did question from the very beginning the justification of requiring everybody to apply digitally and we have called for some time for a ‘Plan B’,” said Mr Wyrill.

“In 2005 the RPA became Defra’s whipping boy despite the fact that Defra had set it up to fail. Exactly the same situation is occurring now.

“We are seeing hardworking RPA staff pulling out all the stops to try to get the system working against an unrealistic, unfair and disjointed Defra policy.”

The RPA should have been given full responsibility to develop the IT rather than it being retained as a Defra responsibility, he added.

The TFA also said Defra had also “wrongly decided” to scrap paper applications and move to a digital-only application system.

Industry leaders from the TFA, the NFU, the Country Land and Business Association  and the Central Association of Agricultural Valuers are due to meet RPA chief executive Mark Grimshaw at the agency’s offices in Reading, Berkshire, on Friday (6 March).

They will be demanding a full and frank disclosure on the  status of the BPS rollout, including contingency plans if the IT system turns into a disaster.

The TFA said it had heard from dozens of BPS registered farmers who were unhappy with the functionality of the new IT system.

Constant error messages, the general slowness of the system, mapping issues and problems with functionality have been common complaints.

Speaking at the NFU conference in Birmingham last Tuesday (17 February), Mr Grimshaw pledged that the online system would be “fully functioning” by the end of March.

A Defra spokesman said: “The new payment system is on track to deliver with more than six in 10 farmers registered. Users are able to view maps and update their land, and the entitlement function will shortly be available.

“We’ve made sure support is available for any farmers who need assistance making their claim online, such as by calling the RPA helpline on 03000 200 301 or by arranging an appointment at any of the 50 support centres set up across the country.”