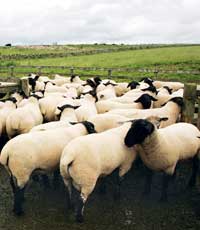 That was the Scottish government’s interpretation of the latest independent research carried out by the Food and Agriculture Policy Research Institute into the likely impact of the UK vision.

The research, commissioned by the UK government and the devolved administrations was published this week. It looked at the CAP “Health Check” reforms, further trade liberalisation following World Trade Organisation talks, full decoupling of subsidy payments across the European Union and the phasing out of the single farm payment.

The Scottish government’s rural affairs secretary, Richard Lochhead, said the research showed that the UK’s future vision for the CAP would hit Scottish farmers harder than those south of the border. The researchers’ model showed that in Scotland by 2018 the beef herd would be 33% smaller than it is now, sheep numbers would be 28% fewer, sheepmeat prices would be 11% lower than projected and dairy prices 3.7% lower.

Mr Lochhead said: “This research blows out of the water any pretence that the UK government’s vision for agriculture has the interests of farmers at its heart. Laid bare is the harsh impact their plans would have on farming across the UK and on the devastation they would cause in Scotland in particular.”

NFU Scotland president Jim McLaren said that since devolution there had been tension over the UK government’s position in agricultural negotiations in Europe, particularly its view on CAP.

He added: “The line pushed by the UK Treasury to scrap the CAP has flown in the face of the position of the devolved administrations and industry and only served to infuriated a significant number of other member states.”