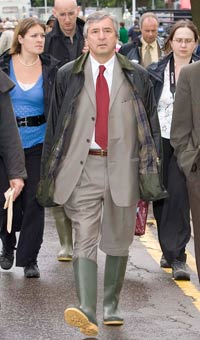 Speaking at an NFU press meeting at the Royal Show on Tuesday (7 July), Mr Fitzpatrick said he was aware of the “real anxiety” that problems with the RPA’s latest attempts to map England had caused.

“I have had a discussion with the RPA and they will be coming into DEFRA on Thursday (9 July) to talk things through,” he said.

“We are aware of the concern about mapping and we are going to get on top of it as soon as possible.

“We will be liaising closely with the NFU to put things right.”

Mr Fitzpatrick’s comments came as the NFU president said one farmer who had contacted the NFU said his land had been miscalculated by a massive 300ha.

Another member had challenged the NFU to find one map that had been sent out correctly, something Mr Kendall said the union had so far been unable to do.

The first DEFRA minister to ever attend the NFU’s annual Royal Show press briefing, Mr Fitzpatrick said he was on a “steep learning curve” but working hard to understand the industry’s issues.

“I have been in the job for just a few weeks but I have already visited some farms and shows and I hope to spend most of August going to as many shows as possible,” he said.

“This will include a visit to farms in the south west [which are hit by bovine TB], which will be a priority.”